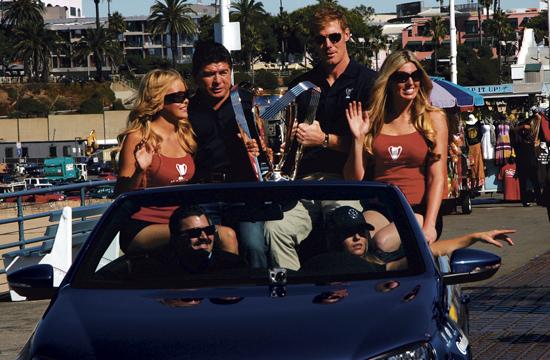 MLS Cup 2011 activities kicked-off in Santa Monica on Wednesday when the Philip F. Anschutz championship trophy, which will be presented to the winner of MLS Cup 2011, made its official arrival into the greater Los Angeles area.

Created by Tiffany & Co, the sterling-silver trophy and its entourage were joined by local soccer fans who welcomed the famed hardware to Southern California.

Fans had the opportunity to take photos with the trophy and players.

The Trophy Arrival Celebration kicked-off ten days of public activities and special events leading up to MLS Cup 2011, which will be played on Sunday, Nov. 20 at The Home Depot Center in Carson at 6 p.m. PT.

The final, featuring the LA Galaxy vs. the Houston Dynamo, will be televised live on ESPN and Galavision in the United States.