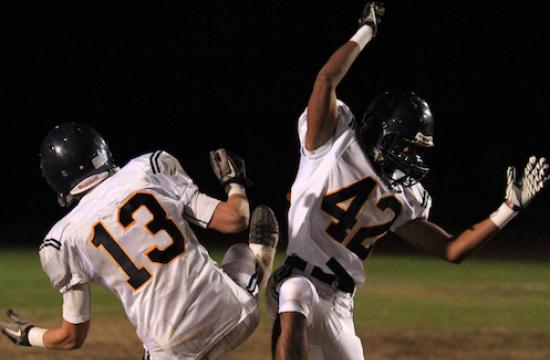 But a missed field goal by Culver City kicker Ret Tilman in the third quarter changed the game, though it seemed harmless at the time.

When the fourth quarter came, the SaMoHi Vikings, who had found ways to move the ball on the Centaurs throughout the night, moved to within field goal range for Elliot Sahler, who put the go-ahead field goal through the uprights to make the score 10-7.

On the ensuing possession, senior Korey Garcia stripped the ball from the Culver ball-carrier and Matt Rus-kosa recovered. Garcia found the end zone for some insurance. The Vikings were up 17-7 with just under four minutes to play.

The Centaurs struck on their first play from scrimmage when Lukas O’Connor’s pass hit the speedy Alex Jackson on a post route and he outran the Viking defense to cut the lead to three.

The Vikings had the last laugh when they moved the chains, drained the Centaur timeouts and ran out the clock.

This is the first Ocean League title for SaMoHi since 2001.