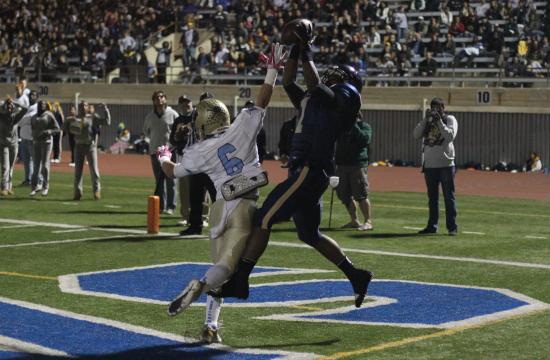 Santa Monica High School wide receiver Sebastian Larue proved too much for Channel Islands, scoring four touchdowns in the 28-20 Viking victory over the Raiders in the first round of the CIF playoffs on Friday night.

The Raiders scored first but Larue made them pay on the following kickoff running it back for 95 yards, breaking tackles and weaving his way through defenders on his way into the end zone.

The Raiders knocked in a field goal only to get beaten by Larue on Santa Monica High School’s next possession on a 85-yard touchdown pass from quarterback Christian Salem.

Larue went on to score two more touchdowns before the Raiders were able to get any more points on the board.

But by then it was too late.

“It was a dogfight to the end and I’m glad we stayed with it and got the victory,” said Santa Monica High School Head Coach Travis Clark.

Even though the Raiders effectively shut down most of Santa Monica High School’s vaunted running game, they weren’t able to stop Larue.

When it counted was in the Vikings’ final drive. The Raiders had made their way back into the game when Samohi snapped the ball through their endzone and Channel Islands’ Richard Palmer followed up with a touchdown run to cut the lead to eight.

But after the Vikings recovered the onside kick, Samohi ran out the clock after converting a first down that forced Channel Islands to use their last timeout.

“I was disappointed in the way we ended the game,” said Clark. “I didn’t want to end the game with them scoring those points.”

Yet even in disappointment, Clark got the Viking win and was proud of his defense.

“I knew my guys were going to be resilient and that’s been their character all year,” said Clark.

The Vikings will play Ventura in the second round of the CIF playoffs. The location will be determined later.