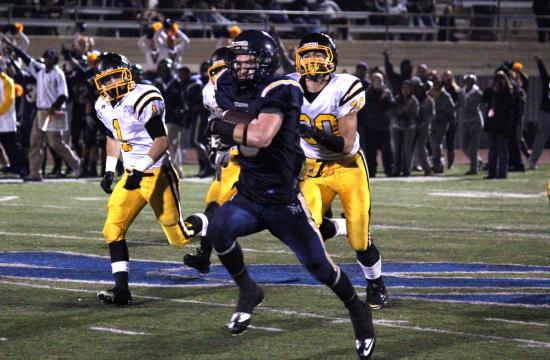 With a number of talented receivers on the sidelines recovering from injuries, Samohi’s Dylan Muscat, who normally prevents touchdowns as a cornerback, delivered a 78-yard touchdown as a wide receiver in the fourth quarter to insure the Vikings’ 29-24 victory over previously unbeaten Ventura on Friday night.

“After Sebastian (Larue) went down in the first quarter (with a mild concussion), some of those guys were going to have to step up,” said Santa Monica High School head coach Travis Clark. “Tonight was Dylan’s first touchdown. We’ve been trying to get him in a position to score and wow, what a way to score a touchdown. I’m really proud of him.”

Muscat went on to anchor a solid Viking defense that not only managed to stop six of seven Ventura fourth down conversion attempts, but also limited the Cougars high-powered offense to only three touchdowns.

The Vikings knocked Conner Armstrong short on fourth down with under two minutes to play and successfully ran out the clock.

“It was a great effort by that (Samohi’s) defense (on 4th downs) tonight,” said Clark.

Samohi limited their penalties and overcame two early turnovers that kept the game close through the third quarter.

“Earlier in the season we got a lot of penalties, and you can’t win playoff football with that,” said Muscat. “We really focused this last week and tried to minimize the mistakes.”

The Vikings’ defense stepped up and made key plays when they needed to.

“It’s not just one guy, it’s a system, and we work together,” said Muscat on his team’s victory. “Our job on defense (tonight) was to create turnovers, lock them down, and hope for the best and that’s what happened tonight.”

After Muscat scored on the touchdown reception, Clark said he knew 12 points was not enough with six minutes left. Ventura’s Leo Camacho scored on the ensuing drive and forced the game to the wire.

“What a great program,” said Clark. “They (Ventura) were 11-0 and somebody had to lose tonight and fortunately it was them,” said Clark. “We’re excited about getting to the third round and moving on.”

The Vikings will play against their familiar Ocean League rival Culver City in the CIF semi-finals. Samohi won the previous matchup 17-14 to capture the Ocean League crown. The game will be in Culver on Friday night with a 7:30 kickoff.