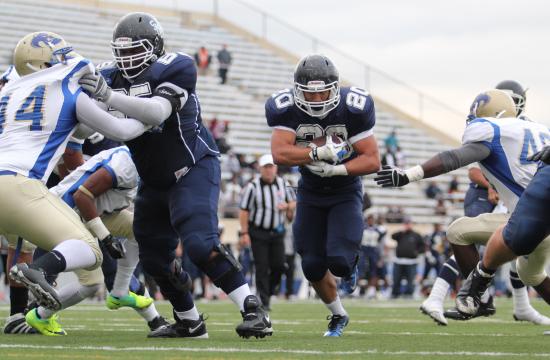 With 8:14 left in the 4th quarter and the score 25-21 SMC, the Corsairs had just punted, and Head Coach Gifford Linheim found himself putting his trust in his defense to get the job done just as he had done all year long.

The stage was set for the Los Angeles Wildcats to prove that they could be Pacific Conference champions and knock down SMC in the undefeated league matchup.

On the first play after the SMC punt, West Los Angeles Quarterback LeAndre Thompson was hurried by the SMC defense, tossed up a wounded duck, and was intercepted by defensive back Clinton Perry who returned the ball 47 yards to the Wildcat three-yard line.

This was the second of three times Thompson had been picked off by SMC, the other two courtesy of defensive back Brian Hawthorne.

From there, Santa Monica College running back Daniel Pipkin punched in a touchdown to seal the 32-21 Corsair victory.

“This is where we wanted to be with this bunch of guys,” said SMC head coach Gifford Lindheim. “It didn’t matter what the score was. I’m just happy we found a way to get it done the way we did.”

Lindheim led his team to 6-0 in the Pacific Conference, 8-2 overall, and has captured SMC’s first league title in over a decade.

And while fixing the offensive mistakes, the defense shut out the Wildcats in the second half.

“Halftime gave us a chance to settle our emotions and get our heads right and then we let them know that we are SMC,” said defensive lineman Michael Perry, Clinton’s brother. “When it comes down to it, 3rd and 4th quarter, there is no team that can beat us.”

Earlier this season, SMC lost to San Bernadino Community College late in the fourth quarter during a non-league game. They have been correcting that mistake ever since with their third second-half comeback in a row proving that they have learned to win big games when it counts.

“We lost that (San Bernadino) game,” said Lindheim. “It was a game we should have won, but we didn’t and after that game everybody showed up Monday ready to practice, and we had a bye week. At that moment I knew we had something special. (I knew) this (wasn’t) the same old Santa Monica College and I knew we were going to do some really good things.”

The turning point came in the third quarter. Down 21-13, West LA tried to pooch punt the ball inside the Corsair 10-yard line, but SMC defensive back Kris Johnson made them pay by returning the ball 91 yards to set up an Alfonso Medina quarterback sneak to pull to within two points.

The comeback was complete on the second play of the Corsairs’ next possession when Medina connected with Brandon Taylor for an 80-yard touchdown pass to go up 25-21.

““It got everybody up. He just caught it and nobody was going to catch him. After that, we were a whole different team.” said SMC quarterback Alfonso Medina who threw for 195 yards against the Wildcats. “We wouldn’t have won this game without the effort of the whole team and I’m thankful that everyone was a part of this,” said Medina.

SMC will play East LA in the American Bowl at Corsair Field on Saturday with a 1 p.m. kickoff.