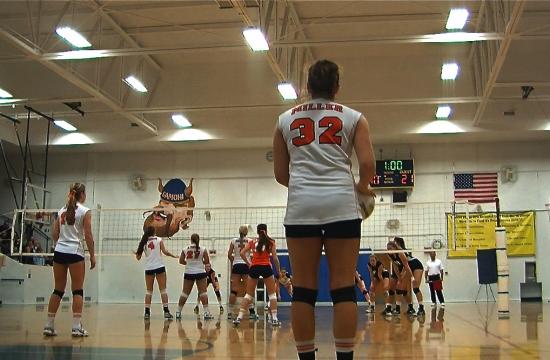 After a fast start in the first set, the Poly Panthers adjusted on the fly and countered the attack of the Samohi Vikings.

“They did a good job scouting our team,” said Samohi coach Liane Sato. “We just just couldn’t get in a rhythm and get our groove on.”

“Real tough, they’re a great team,” Sato said. “Semifinals for this group of girls at Samohi (is) a fantastic finish for them. (It was) an awesome season.”

The Lighthouse Christian Saints had just as much trouble with Sierra Canyon. A slow start put the Saints down two sets after losing 25-14 and 25-15.

“Sierra Canyon brought it to a whole new level for us,” said Lighthouse coach Emily Hamilton. “Our offense usually works, but tonight we had to adjust to their defense.”

Hamilton said the Saints “ended on a high note” when they pushed the Trailblazers to the end before eventually falling 25-19.

And Pacifica Christian finally got to see a team that was ranked in the top 10 of Div. 4A in the Hemet Bulldogs.

Pacifica coach Billy Allen said against a team of this caliber, they “didn’t have many weaknesses.”

Hemet started strong with a 25-15 win in the first set. The Sea Wolves battled in the second to keep Hemet in check, but the Bulldogs still prevailed 25-20 and shut the door on PCH’s season by winning the third set 25-14.