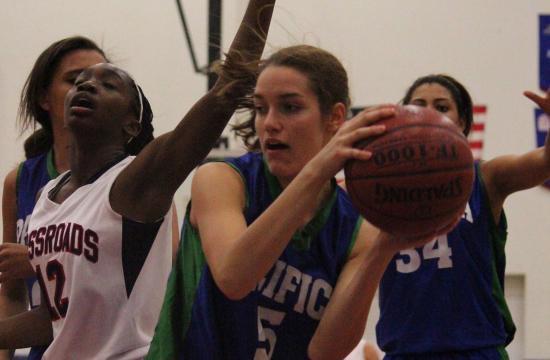 A few miles outside of Santa Monica, Jackie Robinson lettered in four sports during his days at UCLA. Before that, he starred in four sports during his high school days at Pasadena’s Muir Tech. Almost 70 years later, then prep star LeBron James was a beast on the football field even though most of the country was salivating for his professional basketball career to start shortly after graduation.

While Robinson and James were every bit as athletically talented in sports other than the one where they earned professional paychecks, it appears today’s student-athletes are focusing on just one sport.

Here in Santa Monica, the sports department here at the Mirror has observed many student-athletes are not crossing boundaries into other sports, sometimes forsaking natural talents in athletic ability to focus on being the best in another.

In some instances, it is a matter of practicality. A student who wants to play boys’ basketball may not be able to play boys’ soccer, as both sports compete at about the same time.

Complicating the matter in some sports, such as volleyball, are club teams, which are independently created and compete outside the realm of a high school’s athletic department.

Of course, there is also the issue of attending classes, doing homework, and attending school.

“Most of the coaches endorse that idea to try to play two different sports, but what happens is sometimes the timing doesn’t work out,” SaMoHi’s head boys’ and girls’ coach Liane Sato said. “Like if we go to semifinals (in volleyball), if (the kids) want to play another sport, they’ll contact the other coach ahead time and try to make the team if they really wanted to play.”

Sato pointed out it is becoming increasingly difficult to balance commitments between club teams and school sports due to travel schedules and conflicting practice schedules.

“There are a lot of travel teams. Right now, a bunch of our players are playing club volleyball,” she added. “The practices would conflict with the sport in that winter season.”

Then again, not all students are eyeing athletic-based college scholarships. Some of Santa Monica’s best athletes do not have plans to pursue their athletic careers beyond high school.

Genevieve Hook is a junior who plays both volleyball and basketball at Pacifica Christian High School, the only student in a Santa Monica high school this year to compete in sports in both the fall and winter seasons.

A year earlier, she took on track-and-field after her two hardwood sports were complete. Though volleyball is her primary sport, Hook gives a slight edge to basketball in the “fun” department.

“I’ve been playing volleyball for six or seven years. I’m definitely better at volleyball but I am having more fun playing basketball,” Hook said, adding she is contemplating playing golf in her senior year. “I think volleyball, at my school, is one of the most demanding. We definitely have a lot of practice time, we have a lot of away games.”

While Hook is dabbling in several sports, she said she does not plan to retain her student-athlete status in college. She believes college admissions committees look favorably upon student-athletes playing multiple sports while still maintaining their studies.

“I think it looks good for college that I am playing sports at all, but I never really thought about how it would look to play two sports,” Hook added.

Interestingly enough, at some of Santa Monica’s smaller schools, playing two sports may not be an option, what with a smaller student base creating greater opportunities for student-athletes to crisscross programs.

“(Being in) small schools definitely has an effect. There’s more of an opening in playing time. You can play a couple sports and maybe have a better chance at playing varsity,” Pacifica Christian High School athletic director and head boys’ basketball coach Kevin Kelsey said.

Of course, there are limits to how much student-athletes are capable of doing, and Kelsey indicated it is just as important to not forget the “student” element of “student-athlete.”

Kelsey pointed out how one of Hook’s volleyball teammates, Kiani Lane, sought to play soccer, but doing so may have been a strain on her. Like Robinson decades ahead of her, Lane would have been a four-sport athlete – volleyball, soccer, cross country, and track – had she been chosen on the soccer roster.

“(She) was signed up to play soccer, when I told her we had more than enough girls and we would be cutting,” Kelsey said. “We agreed she should concentrate on club volleyball and academics. Kiani played four sports her freshmen year. She was dying by the end of the year.”

While playing four sports may indeed be demanding and overwhelming, Verdugo points out the other extreme – limiting a student-athlete to just one sport – also comes with costs and negative ramifications.

He observed, “very few football players at SaMo carry over to basketball.”

“I just think kids are getting the wrong advice. Good athletes can adjust and learn how to get their basketball legs. I just see it as more of a trend to lockdown a player into one sport,” he said. “A college is not going to turn away a good athlete. I think colleges will definitely look at someone who is only focused on a particular sport. At the same time, I think you would miss a lot in high school. I don’t think it’s fair to a kid to lock them into one sport.”

Verdugo pointed out that high school is a rare moment in a person’s life when they can try different activities and enjoy them all. Even more, playing multiple sports while maintaining academic progress could foster positive human development, Verdugo argued.

“High school is supposed to be about memories and fun and camaraderie, and if you get different coaches in high school and I think that is healthy, too,” he said. “I encourage kids to play multiple sports. If one of my basketball players wanted to play another sport, I would say have at it.”