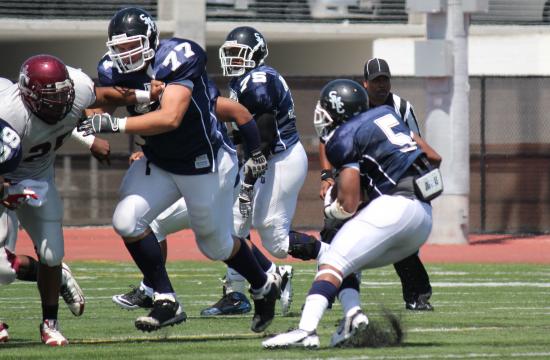 After receiving numerous offers throughout the season, Corsair lineman Alexandru Ceachir has decided yelling “Let’s go, Utes!” will be his battle cry.

The SMC two-year starter at left tackle from Moldova, Russia, took the entire season to think things through, but on Tuesday, declared the University of Utah was the place for him.

“They have great coaches with Norm Chow and Tim Davis,” Ceachir said. “I will have an opportunity to play as soon as possible. Coming from JUCO to Div. 1 (FBS), I feel I need to learn a lot of new things, but there are also a lot of common things, like drills and techniques (SMC Offensive Line) Coach Dave Banuelos showed me and made me learn.”

Ceachir said if he passes his classes this semester and receives his Associate’s Degree from SMC, he will have the opportunity to enroll at Utah as early as the spring semester. If this happens, he will be in a Ute uniform for spring football.

Ceachir said playing in the Pac-12 Conference had a huge impact because he has family and friends here.

“The coaches are telling me to relax and told me there was going to be a lot of pressure,” he said. “But they also said I need to have fun because this opportunity will only happen once in my life.

“I am really proud to be a Corsair. My time at SMC was really good. I got a lot of experience that will help me in life. I will never forget this feeling. We went through a lot of things (on the team), but the most important thing was that we were together.”

Ceachir also received offers from Colorado, Cal, Arkansas and Hawaii among others.