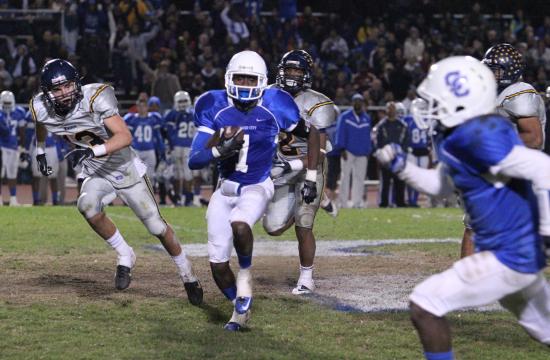 It was sweet revenge for Culver City Centaurs who had lost a previous league matchup against the Samohi Vikings just four weeks ago.

By the time the fourth quarter came, the score was well out of reach at 37-0 until Vikings running back Korey Garcia plowed in a touchdown with only three and a half minutes left in the game and putting the final score at 37-6.

Garcia rushed for 190 yards last game against the Centaurs but this time he was shut down and rushed for just under 100 yards.

“We knew we had to stop (the Vikings) on the run, so we game planned to keep (Garcia) under 100,” said defensive line coach Jesse Sanchez.

The expected aerial attack of Viking Quarterback Christian Salem was non-existent and he only completed only one pass in the first half.

In order to beat the Vikings, the Centaurs decided to try their own offensive attack from the air, shying away from the running game, and it worked. Centaur quarterback Lukas O’Conner picked apart the usually solid Viking secondary, spreading the ball around the field and finding many of his receivers wide open.

“This time we threw the ball and just lit them up,” said O’Conner.

In fact, O’Conner’s only mistake was early in the first quarter when he was picked off by Viking cornerback Dylan Muscat.

Yet the lackluster Vikings would have little to cheer about after this interception.

Offensively, SaMoHi couldn’t score. This allowed the Centaurs to bounce back on their next possession that culminated on a 10-yard rushing touchdown by do-it-all back Kevin Porche.

“We didn’t execute. We left a lot of plays and points on the field,” said Samohi coach Travis Clark. “They played a great game, you have to tip your hat off to Culver City.”

“We had a lot more confidence this game,” said wide receiver Alex Jackson, who caught a 33-yard touchdown pass from O’Conner in the second quarter. “We knew we could handle these guys because after the first game we watched films and we saw more holes that we didn’t attack the first time, so we took care of it this time.”

Culver City came into the CIF with a tough slate but has proven they can compete.

SaMoHi finishes their season at 11-2 with a CIF semifinal bid and an Ocean League crown.