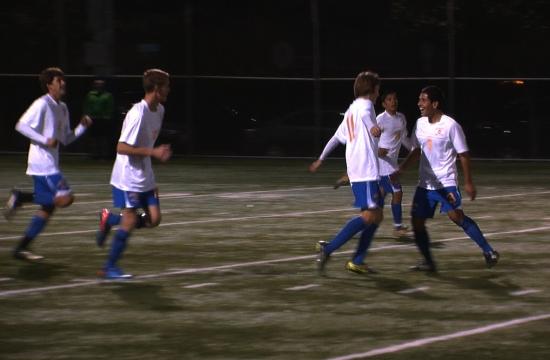 With just two days of rest after facing a solid Crespi Carmelite soccer program on the road in the preseason opener, it seemed as though Samohi had the perfect storm of excuses to hang its hat if they couldn’t win their first game at home on Thursday.

But the Vikings pulled through and walked away with a 3-1 win over Manhattan Beach Mira Costa on Thursday.

Entering the game, the Vikings were ranked sixth in Division IV; yet, with only two returning starters, coach Serafin Rodriguez viewed this season as a rebuilding year.

But that wasn’t the case in the convincing home win.

“We started dominating the game very well,” Rodriguez said. “We had many chances on goal.”

A pair of those chances came early, when the Vikings had two shots on goal within the first 10 minutes of the match.

The second of those shots actually broke through and found the net when Alex Farr bent the ball passed the Mustangs goalkeeper to give the Vikings a 1-0 lead.

Samohi kept the ball in their zone for most of the firts half and preserved the one goal lead heading into halftime.

Both offenses had opportunities early in the second half, though momentum appeared to be in Mira Costa’s favor in the first 10 minutes.

After the Mustangs tied the match moments into the second half, a handball penalty took away a go-ahead Mustang goal that sailed over the head of goalkeeper Eric Stocker.

Farr followed with a chance of his own to extend the Viking lead when he had a breakaway play with only the goalkeeper to beat, but his shot veered wide left.

Struggling to regain control of the match for another 15 minutes, Samohi had a scoring opportunity on a free kick about two-thirds of the way into the second half.

Taking advantage of a frantic Mira Costa team that was not properly set up, Kevin Eyler quickly took his free shot and found the back of the net to give Samohi a 2-1 lead.

“It was a heads up by one of our players on the free kick,” Rodriguez said of the go-ahead score. “The rule is, if you don’t ask for a wall, you can actually shoot the ball right away. The (Mira Costa) defense was in chaos, asking the goalkeeper where to set up. But we didn’t even ask for a wall, so we shot it right away.”

In the final minute of the match, Mira Costa attempted to shots on goal, but Stocker athletically prevented both from bending passed him into the net, preserving the 3-1 victory.

Rodriguez believes the win over Mira Costa demonstrates how good of a team Samohi is despite the team’s youth.

“On paper, this year is supposed to be a rebuilding year,” Rodriguez said. “The team will turn out to be better than a lot of people think.”