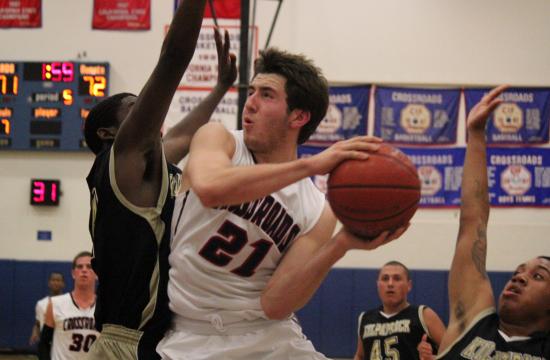 It took two extra periods, but the Crossroads Roadrunners prevailed over the Kilpatrick Mustangs on Tuesday, winning 84-82.

Despite only scoring three points, the Roadrunners can consider Alec Roth their MVP of the game. With 10 seconds left in the first overtime, Crossroads down by three, Roth threw up a fadeaway at the buzzer that rattled in to send it to a second overtime. The legs of his teammates pumped with adrenaline and ‘Roads took the game from there.

Myles Stephens led Crossroads with 18 points before suffering an ankle injury in the second half. Justin Blair followed up with 16 points, while Tommy Nowels had 13 points and Max Pasamonte had 11.

In the losing effort, Kilpatrick’s Leonard Clark led all scorers with 22 points. Shacory Hammock helped with 18 points, Christian Gerris had 17 points and Marquise Luke had 11.