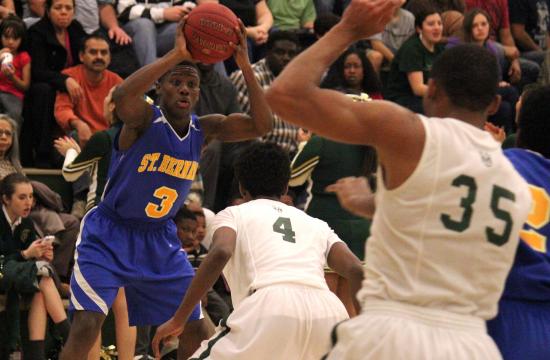 Passions heated the court during the intense Catholic high school rivalry between St. Monica and 2011 CIF champions St. Bernard on Friday night. After the game, head coaches Reggie Morris of the Vikings and the Mariners Khi-Min Jung had to be separated by their respective assistant coaches after a brief altercation.

St. Bernard won the game decisively 71-51 and held a commanding lead for pretty much the entire game.

Viking starter Emani Gant fouled out of the game late in the third quarter, much to the chagrin of the large St. Bernard crowd who had come to support their visiting team.

But Gant’s exit only fired up the rest of the Vikings and there was nothing the Mariners defense, nor the large and energetic hometown crowd, could do to alter the course of the game.

A wide open slam dunk by St. Bernard’s Brandon Randolph was followed by two three-pointers, one by Lance Booker and another by Jalen Walker, that hammered the nail in the coffin to decisively put the game out of reach at 50-35.

“We had a lot of turnovers which kind of killed us,” said Luke Garner, assistant coach of the Mariners Varsity basketball team. “We were down seven at the half but then we let it get away from us a little bit and they made some big shots. We were a lot smaller and didn’t box out well and they capitalized on that.”

Randolph was on fire, hitting everything in sight, and the defense of the Vikings pressed the Mariners to cough up a large number of turnovers while grabbing most of the rebounds on both offense and defense, enabling them to capitalize on most of their missed shots.

“We couldn’t stop Randolph,” said Garner. “After the dunk they hit two threes on us and that put them up by 15 and we found ourselves struggling to get back in the game from there.”

Randolph scored 29 points for the Vikings while Booker scored 17.

Matsunaga put up 17 points for the Mariners while freshman standout Ike Udengwu added another 11.