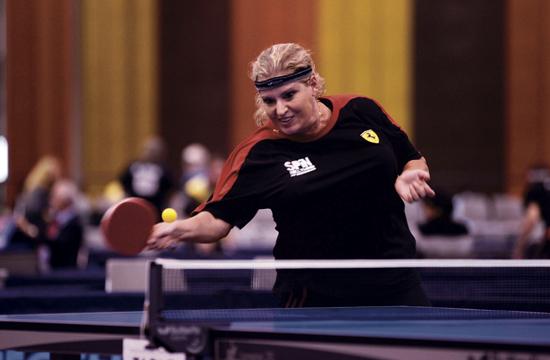 At 47, Santa Monica’s Kim Gilbert has picked up her table tennis paddle for the first time in two decades and is now back in training with her sights set on the 2012 Olympic Games in London.

With nearly 20 years passing by between competitive bouts, Gilbert’s return to the table tennis arena for the upcoming Olympic trials is quite a comeback story.

Indeed, Gilbert could very well have hung up her laces and called it a career after claiming Gold at the 1990 U.S. Olympic Festival in the Women’s Doubles section of table tennis.

official playing days went dark. It was a career that was supposed to be over at that point, with a career-ending injury of a shattered elbow.

But in 2010, Gilbert decided to pick up a paddle again to see if she could still play.

Play she did, as Gilbert finished as a semi-finalist at the 2010 U.S. Closed National Women’s Singles (Over-40) event.

In 2011, table tennis success found Gilbert again, both as a singles semi-finalist at the sport’s U.S. Open (Over-40), then later as the women’s champion at the Hawaii Island Open.

Now, with determination, skill, and the help of a few sponsors in Dial 800, Hama Sushi of Venice, and First Capitalcorp, Gilbert is pushing to enter the winner’s circle one more time – this time as the top master of the upcoming Olympic trials.

Gilbert provided The Mirror with some inside perspective of the sport’s intensity, all while striking down a few common misperceptions.

“Ping pong players have been many times perceived as a part of a Geek Squad, clearly today we are an ‘Entourage,’” Gilbert said. “Another misconception is that you don’t have to be very strong to play. Wrong! When playing at our level, the spin on the ball can change its weight from 3 grams to 75 pounds. So, in reality, it’s like picking up a cement block and hurling it forward in less than a nano second.”

In addition to the technical difficulties of the sport, Gilbert said the game was constantly evolving.

“A table tennis player is constantly evolving, as there is an infinite amount of strokes and play patterns as each spin of the ball is different,” she said. “The sport involves a myriad of physics that require the mind and body to work together in speed and unison. It is a very difficult sport to master at a high level. It takes at least 10,000 hours of effective training to master the sport.”

Thankfully, Gilbert started table tennis at an early age, taking on the sport at age 14.

She started entering competitions three years later after returning from a lengthy training camp in Europe.

“I competed nationally in the top 12 for many years until I sustained a career ending injury shattered my playing arm into 15 pieces,” she said. “After an 18-year retirement, I tried to play again two years ago just for exercise and to my own amazement I was able to play well. So now I am thrilled to have another athletic career at 47 years old.”

Despite the long gap in her career, Gilbert’s comeback has actually opened the door for her to achieve greater accomplishments – and establish fonder memories.

“One of my greatest accomplishments was in 1990 winning the Gold Medal at the U.S. Olympic Festival,” she said. “It was a 14 hour long day of competition and having a come from behind win when you are the underdog makes the win that much sweeter. But I have a strong feeling that my fondest memories are yet to be made at the upcoming 2012 U.S. Olympic trials.”

Gilbert heads to Cary, NC next month to compete in the Olympic trials that take place Feb. 9-12.