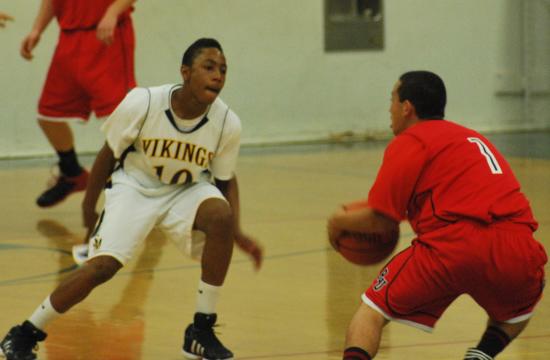 What appeared to be primed for a runaway game at the outset turned to be a narrow 42-41 home victory for Samohi over Redondo Union on Wednesday night, as the Sea Hawks’ stifling defense shut down the Vikings offense in the second half. The Vikings did not make a field goal in the final seven-plus minutes of the game thanks to Redondo Union’s grind-it-out style of play.

“I thought we were aggressive and more crisp in our execution in the first half,” Vikings head coach James Hecht said. “The second half, we weren’t as sharp offensively.”

“Obviously he is a guy people are going to be aware of,” Hecht said. “He was aggressive in the first half, second half, he was a little frustrated at times, didn’t attack the basket.”

Redondo Union head coach Tom Maier credited his defense – particularly Brian Frew – for shutting down Mathews and almost completing a comeback from a deficit as high as 13 points in the second half.

“He disappeared,” Maier said of Mathews. “I’m proud of our defense for giving up just 16 points in the second half.

That defense did not seem to be able to stop much at the outset, as Samohi jumped to a 15-5 lead after one quarter of play. Mathews alone outscored the Sea Hawks 12-5 in the first frame, including a four-point play late in the quarter.

Both teams played relatively even in the second quarter as the Vikings went into the locker room nursing a 26-17 lead.

Samohi seemed ready to take over in the second half after it grabbed the largest lead of the game, 32-19, within the first two minutes of the third quarter.

However, Redondo Union had other thoughts as the Sea Hawks scored eight unanswered points to cut the Vikings lead to 32-27.

A Jordan Walker buzzer-beating three pointer gave Samohi a 35-27 lead entering the final frame, but the Sea Hawks slowly chipped away at the Vikings lead in the game’s final seven minutes.

Samohi converted three of four free throws to claim a 42-38 lead with 11.4 seconds remaining. Redondo Union’s Darrien Touchstone hit three-pointer in the waning seconds to make the score 42-41, but that was as close as they would come.

Samohi returns to the court next week to face Inglewood at home in the Ocean League opener.