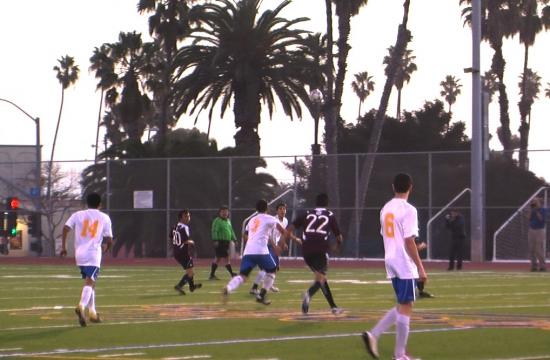 The Vikings did not seem too impressed with Paramount’s 10-2-1 record or its consecutive championships. When the Pirates came to Samohi on Friday, all the Vikings wanted was to be physical and score more goals than its opponent.

That is exactly what happened as Samohi (5-4-1) handily defeated Paramount (10-3-1), 3-0, in a rather physical match that witnessed a small tussle between players and the occasional questioning of foul calls.

Paramount, who had won the 2010 State Regional Division 1 CIF title and repeated as Southern Section Division III champions, struggled to find any offense and proved to not be as formidable opponent as it would have otherwise.

Still, Vikings Head Coach Serafin Rodriguez considered his team’s 3-0 victory as one of the most impressive of the young season.

“This is a very important win for us,” Rodriguez said. “They are the number one team in their division. To beat a team like this gives us a lot of confidence.”

Rodriguez indeed had to be pleased with his team on both sides of the ball, with three different players finding the back of the net and the defense pitching a shut out despite the fact that the highly touted Pirates – who had not lost in nearly one month – was hit with the injury bug.

“They play rough and tough,” Paramount Head Coach Rafa Vilasenor said. “We have seven of our 11 starters injured, we played a lot of freshman and sophomores playing today. What can we say? We come to their home and they play their guts off.”

Still, the Vikings certainly have the opportunity to capitalize on the victory and build up some momentum heading into league play in a few days.

Samohi demonstrated its ability to take advantage of opportunities and build up momentum early in its match against Paramount, when junior midfielder Emmanuel Serrano knocked a header in past the outstretched fingertips of Pirates’ senior goalkeeper Tony Maldonado in the opening minutes.

Later in the first half, the Vikings extended its lead to 2-0 when junior forward Aidan Peters’ header guided a corner kick into the goal with about 10 minutes remaining before halftime.

The Vikings scored its third goal about midway through the second half, when senior forward Alex Farr blasted a shot from about 30 yards out the left side of the field and ricocheted the ball off the right goal post before catching the back left corner of the net.

“I’m not very surprised about beating them,” he said. “To some people it’s surprising, but not to me.”

Both Rodriguez and the Vikings hope to continue living up to its own expectations in Ocean League play, which opens on Jan. 11.