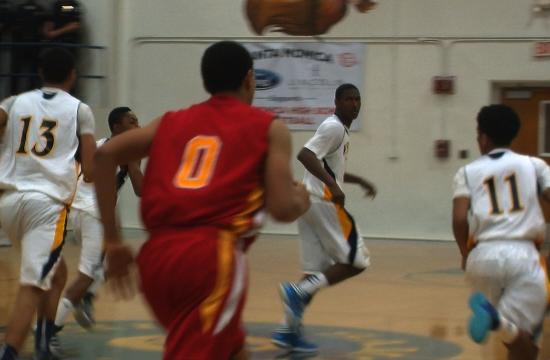 These were not the Vikings Samo fans have grown accustomed to seeing.

The offensive slashing of opposing defenses wasn’t there. The hustle and traps weren’t there on defense. Shots were not falling.

And the Hawthorne Cougars used it as fuel to put a scare into Samo as they looked for their first Ocean League Victory – over a team that hadn’t lost a league game yet.

But with some extra effort from role players in the third quarter and a strong fourth, the Vikings finally shut the door on the Cougars and stayed unbeaten in league with a 49-39 win.

Jordan Mathews had 18 points and “(For the)” Trey Thompson dropped 10 while providing some much-needed sparks in the second half for the Vikings.

The Cougars spread the ball around for the most part, and only Ricky Bryant reached double figures with 13 points.

But Friday found Samohi on the losing end for the first time in the Ocean League this season.

The Inglewood Sentinels won a hard-fought overtime game 65-60 against the Vikings on Friday night.

The win matches Samohi atop the league standings, as both teams’ only losses have been to each other.

The Vikings will try to bounce back at home against Culver City on Wednesday.