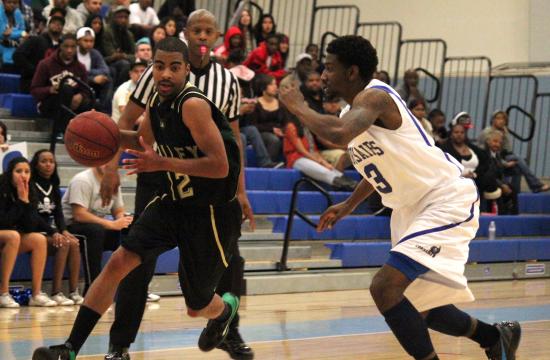 It was 36-24 at the half and sophomore guard Marcus Johnson already had 13 points while his counterpart Lee Lark had zero.

The Corsairs’ bricked field goals and low free throw percentage eventually proved too much for them to win the game, but with the help of a trio of three point shots by Julian Wheeler, and a pair of buckets by sophomore forward Travis Damuth, the Corsairs came back to take the lead 59-58 with 4:47 left to play in the game.

But from there the Monarchs went back to work with freshman guard Domanique Cotton who sank two three point shots in a row late in the game to seal the game for the Monarchs, 80-76.

“I thought we did a pretty decent job early on, but were pretty lackadaisical at the end,” said Monarch head Coach Virgil Watson. “They are a good team and they made a push. We resisted but we need to resist it harder. They even got the lead but we fought back and made a push, too.”

The Monarchs’ Johnson would finish the game with 19 points but was held by the Corsair defense to only six in the second half. Robert Looper added 14 points, and Cotton had 13.

The Corsairs will play at No. 2 Citrus on Wednesday night.