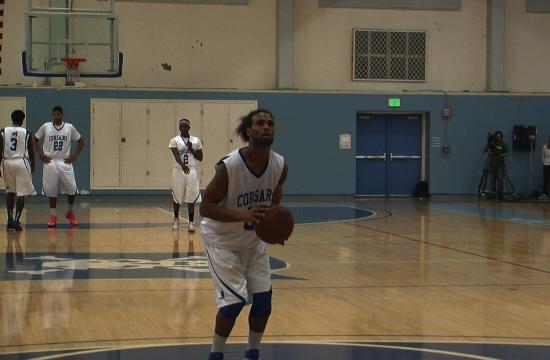 With more rebounds and steals and fewer turnovers, the SMC Corsairs started the defense of their Western State Conference crown on Wednesday night with a 68-55 win over the Bakersfield College Renegades.

“I think it was a collective win overall, a team victory for all of us because we don’t have one superstar. We just have basketball players,” said SMC head coach Jerome Jenkins. “So that’s how we like it. We don’t want you to key on one or two guys, we just want to have basketball players and I give them the freedom to have the green light to play basketball, and it’s been working for us lately.”

The Corsairs had two main scorers, with Travis Damuth dropping 18 points and Lee Lark getting 16 points, but the team produced the stats. Damuth had 10 rebounds and two steals, Esvan Middleton had 14 rebounds, two steals and two blocks and Jesse Armstrong had three steals. Also, six different players had one assist.

The Renegades put three players in double figures but had 20 turnovers to SMC’s 15 and also shot 30 percent from the free-throw line.

Jenkins said this team has high aspirations again this year. As it appears right now, it’s a better conference this year as the Corsairs are in the middle of the pack with Citrus College at the top with a 13-1 preseason record before adding their first conference win by beating Glendale on Wednesday night.

“I think we can defend our conference title,” he said, “but we’re going to have to take it one game at a time and see what happens.

“(Preseason) doesn’t matter right now. We started a new season, so if Citrus won tonight, then we’re tied with Citrus (at 1-0)… We had a chance to see Citrus up close this past weekend down at the Diablo Valley Tournament, and we feel like we match up with them very well, so we’ll look forward to that challenge when the time is right.”

That game is scheduled for Jan. 25 in Citrus, but in the meantime, SMC continues conference play at West LA on Saturday at 7 p.m.