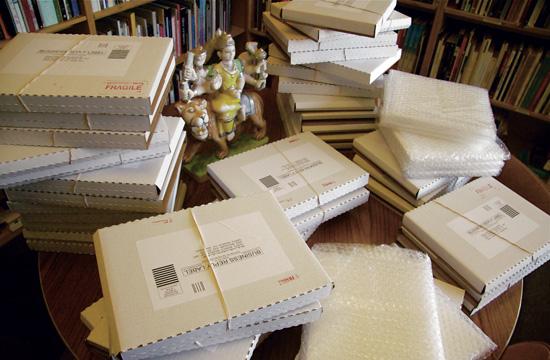 For the past seven years, the Santa Monica Museum of Art (SMMoA) has held its annual exhibition and benefit art sale called INCOGNITO. In less than three months’ time, the event will be enhanced by the addition of the first-ever PRECOGNITO gala and preview event two days prior to INCOGNITO on March 15.

“We’re very pleased to be able to honor these three people who have really made a major contribution to the cultural life of Los Angeles,” Longhauser said.

INCOGNITO 2012 will be held on Saturday, March 17 from 7 p.m. to 10 p.m., and will feature more than 600 original artworks for sale by 500-plus leading, mid-career, and emerging contemporary artists.

All artworks are the same 8” x 10” size and available for only $350 plus tax with all proceeds directly supporting the Museum.

Longhauser said this highly energized evening encouraged attendees, from sophisticated art patrons to first-time collectors, to trust their instincts in selecting the works, as each work was signed on the back and the artists’ identities are revealed only after purchase.

Longhauser said many of the artworks had already arrived at the museum.

She said the invitations to the artists to contribute an artwork were sent around Thanksgiving.

“The artworks are coming in from all over the world,” she said. “Many are from Southern California, New York, Chicago, Israel, France, and Italy. Many are the same artists from previous years, but we have a wonderful committee of experts and every year they find new artists who we should invite.”

The element of surprise that underlies INCOGNITO reflects the essence of discovery that inspires SMMoA’s exhibitions, education, and outreach programs.

Not even The Mirror was allowed to see the artworks that had already arrived for the sale.

A variety of PRECOGNITO/INCOGNITO special packages and ticket levels are now available for purchase.

For a limited time, Luminary and Visionary ticketholders will be offered a Valentine’s Day trip to San Francisco to preview Mark Bradford at the San Francisco Museum of Modern Art. This trip includes a private tour of the exhibition led by Bradford, a seasonal lunch at TRACE, and a delectable dinner at Alice Waters’ famed Chez Panisse Café.

PRECOGNITO/INCOGNITO will be accompanied by a festive cocktail reception featuring musical entertainment by New York City DJ Duo Cassie and Harley, Food by Lene, and a wide range of wine and spirits.

Early purchase is recommended as PRECOGNITO/INCOGNITO tickets are limited.