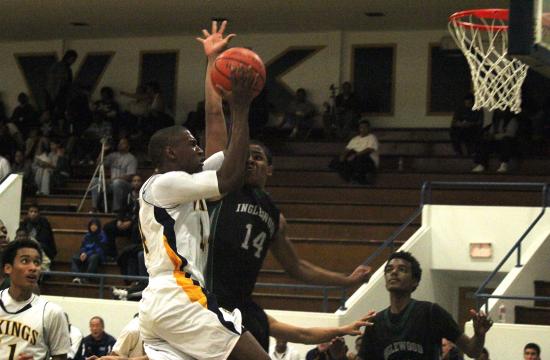 Samohi’s Jordan Mathews had a worthy adversary when the Inglewood Sentinels walked into the Samohi gym Wednesday night.

Kristopher Randall matched everything Mathews did when Inglewood put the ball in his hands. Both scored 21 points in the first half and the Vikings led by two at halftime.

But the Viking defense adjusted and held Randall to only four points in the second half.

And, after a lengthy breather, Mathews came back and kept scoring.

“At halftime, we just reminded the guys we need to be aware of where (Randall) was,” said Samohi coach James Hecht. “He’s one of the better shooters we will face this season.”

The Samohi bench found an answer and used tough defense to pull away from the Sentinels, and Mathews added the final touch with 32 points on the night in the 76-68 win.

Then, on Friday night, Samohi outlasted two 20-point scorers from Culver City and won 67-61 to open Ocean League play at 2-0.

“A lot of credit to our depth and bench play,” Hecht said. “It was a big asset tonight.

“Every team in our league has a guy that we need to be aware of and game plan for. There won’t be too many easy nights.”

While the Culver had two to game plan for, Samohi put three players in double figures. Jordan Mathews led the team with 22 points while Adamassu Williams and Jordan Walker each had 12.

Samohi will play Serra at Price High School on Monday for a special game to tribute Martin Luther King, Jr., before returning to league play against Beverly Hills next Wednesday.