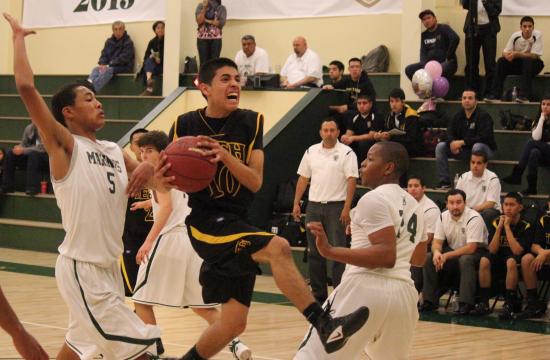 Don Bosco Tech pulled off a win in the final seconds of Monday night’s battle against the St. Monica Mariners. The loss dropped the Mariners to a 4-5 record in the Camino Real League, dimming their chances at a playoff birth.

Both teams traded jumpers and three-point shots, and with only 20 seconds left to play, Bosco was on top 55-54.

A foul sent the Tigers’ Matthew Santes to the free throw line and he converted both of his free throws, putting the Tigers up by three.

“Santes got hot and one of our keys to success was to contain him and we didn’t do a very good job of doing that,” said Mariners Head Coach Khi-Min Jung. “We had trouble scoring down the stretch.”

St. Monica sophomore guard Dennis Ashley had 20 points for the Mariners in one of his best games of the season. He just wished he had 23. His chance to tie the game with a three-pointer missed.

Ashley “had a great night shooting the ball and he had a tough shot at the end of the game, a step back three,” said Jung. “We knew it was going to be a tough game. They play us tough every single time and so we knew it was going to go down to the wire. We just didn’t execute and they did.”

Santes put up 21 points for the Tigers while Max Mora had 11.

The Mariners will get one last shot at the CIF Division Southern Section playoffs when they play St. Paul Wednesday for Senior Night. Tipoff is at 7 p.m.