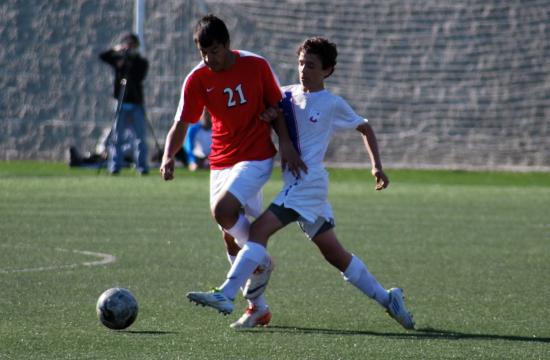 Everyone at Santa Monica Airport Field knew the Roadrunners were going to win the CIF Southern Section Division 6 quarterfinal match on Feb. 23. What no one expected was that the Crossroads Roadrunners would win with the help of Sam Hakim.

Hakim’s game-winning header in the final minute of the first overtime helped Crossroads defeat Rosamond, 4-3, in an epic thriller that featured a game-tying penalty kick and three goals moments before time expired in each frame.

For Hakim, it was his second golden goal in as many matches – quite the rare feat. On Tuesday, Hakim guided a deflected ball with his foot passed the goalkeeper in overtime to give Crossroads a come-from-behind 4-3 victory over Ontario Christian.

Two days later, Hakim redirected a throw-in pass from Ali Marinez with his head past a pair of Rosamond defenders and into the goal with less than one minute remaining in overtime, allowing Crossroads to escape with another 4-3 win.

One Crossroads parent prodded Hakim with an innocent autograph request after he pulled off one of the rarest of accomplishments in soccer.

“It all happened so quickly. Two games in a row, two golden goals in a row. (The ball) just came to my head,” an out-of-breath Hakim said moments after his teammates and school supporters mobbed him. “We’re in a zone.”

Crossroads was not in that zone earlier in the match, when Rosamond scratched the scoreboard first in the 35th minute. Victor Cruz redirected an Alex Harley shot attempt past ‘Roads’ goalkeeper Dylan Ochoa.

However, the lead was short-lived as Quaid Walker scored the equalizer in the final minute of the first half. The senior midfielder punched in a pointblank score after Rosamond struggled to clear to ball out of the box.

The Roadrunners of Crossroads claimed a 2-1 lead in the 48th minute on a breakaway goal by Virgil Chao.

After 22 minutes of scoreless play that included three yellow cards for Rosamond, the visitors from Kern County notched the equalizer when Harley found the back of the net on a penalty kick in the 70th minute.

Three minutes later, Chao pushed the ball along the right side of the field on a breakaway and served Willy Gansa with a cross pass. Gansa guided the ball into the net from about 15 yards out to give Crossroads a 3-2 lead in the 73rd minute.

Spending the next seven-plus minutes in a form of prevent defense, Crossroads made every attempt to spread the field to keep Rosamond away from the goal.

The strategy almost worked until the waning moments of extra time. Set wide open a few yards in front of his bench, Harley received a long pass and started heading toward goal from about 40 yards out. Harley quickly passed the ball to Oscar Sanchez, who was in just in front of Ochoa and guided a header passed the Crossroads keeper to equalize the game just seconds before the whistle was blown to indicate the end of regulation.

“To be honest, it was breathtaking,” Hakim said of the end-of-regulation equalizer. “But we kept our heads up. We went into the huddle (before overtime) and we said, ‘no, we’re not letting that affect us. We’re going to come back out, play like it’s a fresh game, zero-zero.’”

Crossroads did just that, preventing Rosamond from attacking their zone throughout the first overtime period.

Both teams remained scoreless for more then nine of the 10 minutes played in overtime, but in that final minute Marinez found himself deep in the Rosamond zone.

Marinez tossed the ball into the swarm of players in the middle of the zone, and the ball eventually met with Hakim’s head on the left side of the goal.

Hakim’s misdirection made its way to the back of the net to secure the Crossroads win.

The goal was a moment of both relief and validation for Crossroads Head Coach Federico Bianchi.

“I was nervous as heck going into overtime,” Bianchi said. “Momentum was with them. But we believed and it really was a testament to the kids. They really believed in themselves.”

Crossroads will now travel east to face off against Desert Hot Springs on Tuesday in the semifinal match. Winner goes to the Div. 6 CIF Championship.