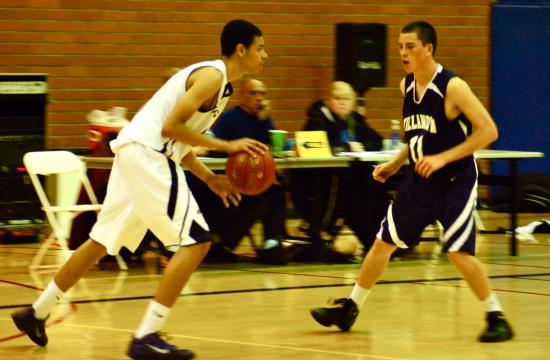 With a big challenge awaiting it in Round Two, New Roads School cruised passed Ojai’s Villanova Prep, 67-44, in its CIF Southern Section Division 5A playoff opener at the Memorial Park gymnasium on Wednesday.

Relying on a combination of pressure defense and guard penetration, the Jaguars (13-7) paced themselves to a steady dose of scoring against a Wildcats team lacking in both speed and size.

The Jaguars’ defensive pressure made it a long night for the Wildcats.

“The press is usually part of the game plan, just to get the other team to move a little bit faster than they would normally move,” Jaguars head coach Thomas Blunt said of the full-court press his Jaguars implemented early in the game.

The first round victory now pits New Roads, who finished second in the Coastal League before drawing the No. 16 seed in the CIF Southern Section Division 5A bracket, against Liberty League champions and top-seeded Providence (23-4) on Feb. 17.

“When I talk to the kids, I kind of break the game up as win each quarter,” Blunt said. “We won the first quarter, that’s gone, then we worked on winning the second quarter, just win each quarter.”

And that is what the Jaguars did. After both teams exchanged points in the early going, New Roads jumped out to a 19-11 lead after one quarter of play.

After the Wildcats basket made it 20-15 with about six minutes remaining in the half, the Jaguars went on a 9-0 run to extend its lead to 14 points. By halftime, New Roads lead 39-26.

The Jaguars did not take their foot off the pedal in the third quarter, as New Roads outscored Villanova Prep 19-11 for the second time in three frames to extend its lead to 58-37.

New Roads led by as many as 25 points before settling for the 67-44 victory.

New Roads will need to keep winning quarters on the road at Providence on Friday night.