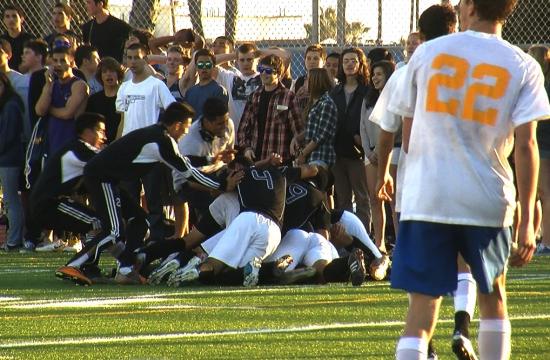 The Samohi boys’ soccer team relied on their defense for an Ocean League championship.

They relied on their defense for a bid to the CIF Quarterfinals.

They relied their defense to force the 16-3-2 Cathedral Phantoms to overtime.

But when the Viking offense couldn’t score a goal, it only took one break in that defense to end Samo’s season.

“Our offense was a little down, but they had a good defense as well,” said Samohi head coach Serafin Rodriguez. “We had a few opportunities, but it was up to one goal. Whoever scored first.”

And in overtime, Cathedral’s Kevin Jardines got by Samo’s Marco Tejada to the left and kicked a perfect shot to the far corner of the goal to beat Viking goalkeeper Aziz Yehia and Samohi.

Rodriguez said he felt his team outplayed the Phantoms, but…

“A lot of times in soccer, the best team doesn’t win,” he said. “We fell a little short, but I’m very proud of the guys.”