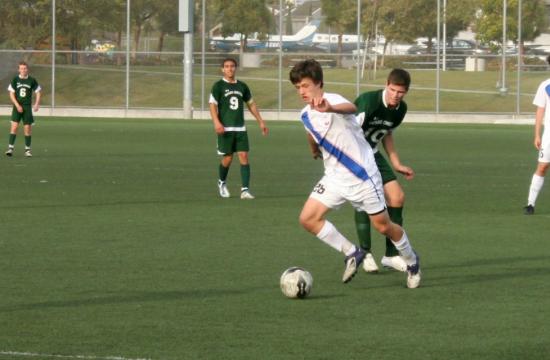 Statistics are not always the best indicator of a match’s status. For almost 75 minutes, the Crossroads Roadrunners boys’ soccer team attempted more shots on goal and corner kicks than Ontario Christian in a third round matchup of CIF Southern Section Division 6 playoffs.

Yet, despite such favorable statistics, it was the Roadrunners who trailed by two goals entering the final seven minutes of its match against the Knights.

It was not until the fourth minute of sudden death overtime, when Sam Hakim’s golden goal from the right corner of the goal box found the back of the net, that the statistics and match results were in synch. Accordingly, Crossroads advanced into quarterfinal round of the playoffs with a 4-3 victory over Ontario Christian on Tuesday.

The three goals allowed were the first scores by a Crossroads opponent in these CIF playoffs; the Roadrunners had outscored its previous two opponents by a combined 13-0.

“They were the type of team that was very powerful when they got the ball into our half. They have two forwards that were excellent players,” Bianchi said after the win. “Every time (the forwards) got the ball, we felt under pressure, so we always had to make sure they weren’t in man-to-man mark but instead have someone help out.

“We haven’t played two guys like that all season,” he added.

The Knights ended the Roadrunners’ two-match scoreless streak in the game’s seventh minute, when Knights’ junior forward Christian Dirksen broke away from the entire Crossroads defense near midfield for a one-on-one scoring opportunity.

Dirksen rifled a shot passed Crossroads’ junior goalkeeper Dylan Ochoa and found the back of the net to give the Knights a 1-0 lead.

About five minutes later, the Roadrunners tied the match on Ali Marinez’ equalizer.

Both teams remained knotted at 1-1 until the 34th minute, when Ontario’s junior midfielder Austin de Falkenberg convincingly struck a cross shot from the left side to give Ontario Christian a 2-1 lead heading into the halftime break.

In the match’s 54th minute, senior midfielder Cody Catano scored a second breakaway goal for the Knights to give Ontario Christian an seemingly insurmountable 3-1 lead.

After Nate Merchant’s goal in the 73rd minute cut the Knights’ lead to 3-2, a scramble in front of the Ontario Christian goal ultimately resulted in Quaid Walker punching the ball over the defenders and passed the goalkeeper for the equalizer in the 77th minute.

The match subsequently went into sudden death overtime, where a streaking Hakim cut toward the net from the right corner and found a deflected ball heading his direction. Hakim immediately redirected the shot into the net from about five yards out to help Crossroads win the match.

The junior midfielder could not have found a more opportune time to capitalize on an open corner.

“I’ve been playing the back post the entire game,” Hakim said. “The ball came miraculously to my feet. I think it was just a deflection through the middle of the box.

Crossroads returns to the soccer field on Feb. 23 against Rosamond.