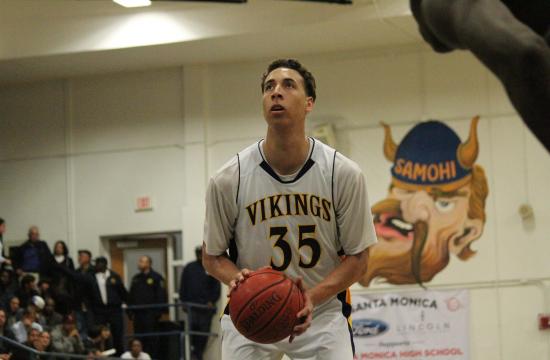 Roosevelt had a chance.

The Mustangs had battled, clawed, clung to life through the entire game. Weathered the storm of two Samohi runs without crumbling like so many Viking opponents had this season.

And it came down to the final minute on Friday night.

After Samohi’s Jordan Walker connected on one-of-two free throws to put Samohi up by three with almost nine seconds left, Roosevelt’s Shawn Joseph dribbled himself to an open fadeaway for three to tie.

But Joseph made Walker stumble so much he stumbled himself and the shot fell far short of the rim, and the tough play that put the Mustangs in that position fell short with it. The Vikings held on 47-44 to advance to the second round of the CIF tournament in Div. 1AA.

“(The coaches) said, going in, that Roosevelt is a very good team with a deceptive win-loss record,” said Samohi coach James Hecht. “They gave us all we could handle, and I’m proud of our guys and I’m proud we were able to get it done.”

The Vikings did not get it done, though, in the first and third quarters. The Vikings connected on two field goals in the first quarter and zero in the third quarter. But their defense made enough plays to keep Roosevelt from pulling away. Samo was down by only one point heading into the fourth quarter.

And that fourth quarter was a spectacle.

Back-and-forth, every shot was matched until the clock showed 26.9 seconds. Samo’s Jordan Mathews had just connected on one-of-two free throws to put the Vikings up by three, and Roosevelt’s Kendall Brown had just drawn contact on a shot in the lane that fell and cut the lead to one.

“This is what CIF high school basketball is all about,” Hecht said. “We made plays when we had to, which was good. Our guys stepped up… hit some big shots, got some key rebounds.”

And the result is a trip to the second round. Samohi lost the coin toss, so they will play on the road against Silverado on Tuesday.

And the Samohi girls’ soccer team advanced in the CIF as well on Friday night. The Lady Vikings shut down and shut out Laguna Beach.

This allowed Ella Warshauer to end the Breakers’ season.

Samo’s Kristen Vasquez was taken down in the open and Warshauer took her penalty kick and knocked it in. That was the first.

The second could be classified as showing off or taking care of business.

In the words of Samohi coach Jimmy Chapman: “Ella ball faked and beat her defender then slotted the ball (to the) far post, out of reach of a diving keeper.”

That was No. 2, which gave Samohi the insurance necessary for the 2-0 win.

The Lady Vikings will face the winner of South Torrance and Immaculate Heart next Wednesday.