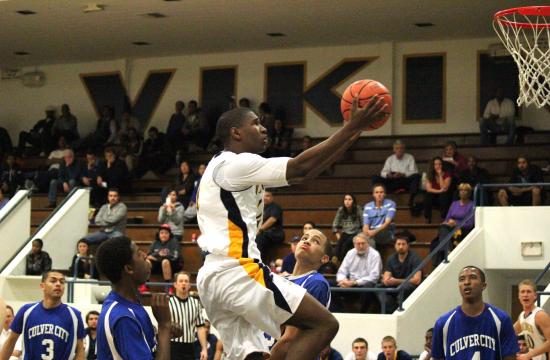 The Samohi football team downed the Centaurs in the regular season to win their first Ocean League title in 10 years. But in the CIF semifinals, round two went to Culver, convincingly.

Wednesday night’s round two between the two boys’ basketball teams was shaping up to be similar. With 2:24 left in the second quarter, the Centaurs looked unstoppable. Aamahd Walker’s fadeaway jumpers couldn’t be blocked. Culver’s defense allowed multiple fast breaks. Isaiah Taylor was all over the glass. The score was 31-14.

But a three from “For the” Trey Thompson and a three-point play from Jordan Walker allowed a 7-0 run to show Samo wasn’t going away.

“In the first half, specifically in that first quarter, we were just very lethargic, we weren’t aggressive, we weren’t attacking their defense,” said Samohi coach James Hecht. “I told them ‘We have to trust. We have to believe.” That’s what I told them at halftime… Thank God it carried over to the second half.”

In the third quarter, the Vikings came out of the locker room and stuck it to the Centaurs, outscoring them 25-11 en route to a 69-62 win.

Samohi’s Spencer Cramer came up big in the second half, pushing Taylor around for rebounds and leading the team with a season-high 17 points. Jordan Mathews added 15 points, Thompson put up 12 points and Jordan Walker had 10 points.

Aamahd Walker led all scorers with 27 points for Culver, and Keilan Horton followed up with 15 points.

“We’ve had flashes of good basketball,” Hecht said. “You take that first quarter away, I thought we played a good second, third and fourth quarter(s). I take my hats off to my guys. We could have easily hung our heads when we got that big deficit in the second quarter, and they clawed back (instead).”

Samohi will have Senior Night tonight against Beverly Hills.