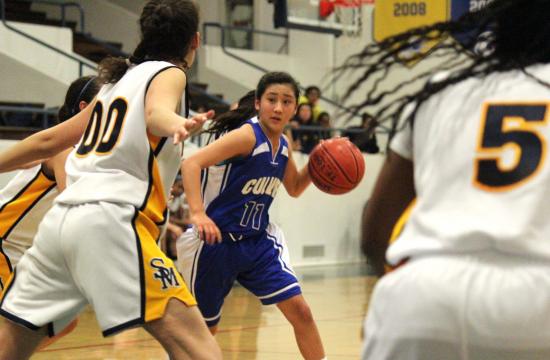 Santa Monica High School’s Aniese Palmore was on fire, racking up 24 points in her team’s valiant losing effort against the Ocean League-leading Culver City Centaurs, who swept the Ocean League title with the 48-43 win on Wednesday night.

The Lady Vikings looked good at the outset and kept the game close after two quarters at 18-17.

But early in the fourth period the Lady Vikings started to slip and after a three-point swish by Jade Neal, the Centaurs had a ten-point advantage 40-30 with 5:56 left to play in the game.

Santa Monica High School’s Palmore led a Vikings comeback in the fourth quarter by sinking a three pointer matched by a three from Vikings Page Onouye.

But foul trouble for the Lady Vikings put Centaur guard Taylor Tanita on the line ten times for the game, and she made six of ten free throw attempts to push the Centaurs over the top in the end.

Jade Neal had 15 points to lead the Centaurs to victory while Lunden Junious had 11 and Tanita had eight.

Palmore was the only Lady Viking in double figures.