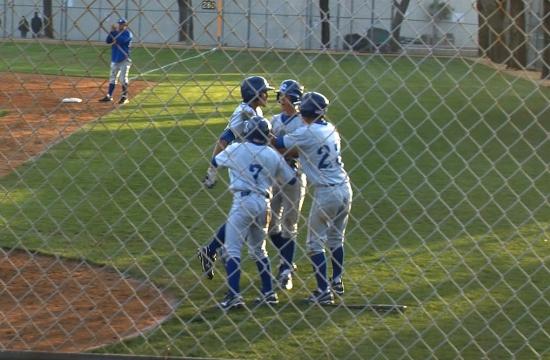 According to assistant coach Tony Todd, Samohi’s baseball team “should be 3-0.”

The Agoura Chargers waited until the end to spring four runs against the Vikings in the top of the seventh inning to answer Samohi’s two runs from the inning before.

Albee Weiss’ only hit of the game was a big one. He drove the ball to the left-center wall and Agoura took the lead 6-4 after three runs came in, dropping Samohi to 1-2 on the season and far into the consolation bracket of the Easton Tournament.

“I thought overall, we were a better team than that,” said Samohi coach Sheldon Philip-Guide. “I thought that when games came down to the wire, we would hold our composure a lot better until today. I don’t know what happened.”

The Vikings had held Agoura to zero runs for four full innings before the drubbing in the seventh.

It was a bad omen when Nobu Suzuki had a routine ground ball bounce up his chest and over him to start the inning. The bases were soon loaded with no outs.

Then came another bad sign. Agoura’s Luis Licata dug hard for home plate and Ryan Barbarin threw for the out. And in that single moment catcher Lino Lares bobbled the ball, Licata touched home plate to cut the lead to one.

That set up the go-ahead, base-clearing triple by Weiss and the second straight loss for Samohi after falling 2-1 to El Camino Real on Saturday.

The Vikings will play at Cleveland on Thursday.