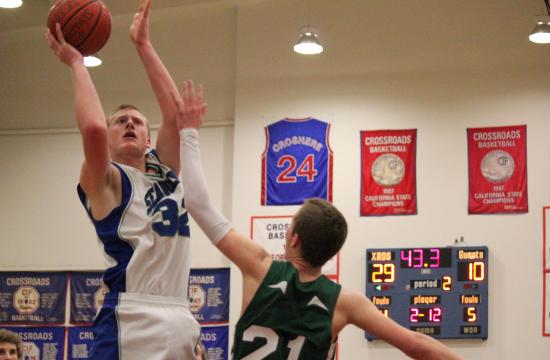 The Pacifica Christian dominated the Newbury Park Gators from the first point to the last on Saturday night, advancing to the third round of the CIF with a 54-30 win.

The Seawolves attacked right away, leading 18-4 after the first quarter.

“We wanted to put as much pressure and just give them as many different looks as possible,” said Sea Wolves head coach Kevin Kelsey. “So we went man, we ran a couple of different traps, and just put pressure.”

Forward John Register had his best game of the playoffs against the Gators, scoring 18 points, blocking a number of Gators’ shots and cleaning the glass on both offense and defense.

“We have not been shooting the ball well and we have been relying way too much on three-pointers so we made an emphasis on getting the ball to Register and let him go to work,” said Kelsey. “The advantage of Register is that he is going to draw some fouls and put players in foul trouble.”

J.R. Walker followed up with 13 points for Pacifica Christian and Kevin Hammer had nine.

Chris Taylor and Cody Morford both put up nine points to lead the Gators.

Pacifica Christian will now advance to the quarterfinals of the CIF playoffs and play No. 4 seed Kilpatrick at Malibu High School on Tuesday.

Also on Saturday night, the Lady Seawolves advanced in the tournament, downing Desert Christian Academy in a defensive battle by the score of 31-25.

The Seawolves will play Rolling Hills Prep on Wednesday.

Also on Wednesday, the Lady Mariners of St. Monica will play in the CIF quarterfinals.

The Mariners avoided squandering a 30-15 halftime lead against Milken on Saturday night after the Wildcats cut that lead to four with under three minutes to play.

But Briana Harris made two free throws and then found Melissa Maragnes for a bucket that would seal the victory. St. Monica finished off Milken 51-43.

Harris and Maragnes each both had double-doubles, Harris with 20 points and 10 boards to go with six assists and five steals while Maragnes had 17 points and 10 rebounds of her own.

The Lady Mariners will play the winner of Brentwood and Whittier Christian on Wednesday.

The Crossroads Lady Roadrunners met a similar fate as their male counterparts on Saturday.

After claiming victory on Thursday to make the CIF Sweet 16, LA Baptist ended their season on Saturday by blasting the ‘Roads 65-47.

And unfortunately for Samohi, two of their teams also fell on Saturday.

The Ladies of Samohi were only down by three points at halftime, but Buena pulled away in the fourth quarter to claim the win.

Imani Holloway put up a 16-point, 12-rebound double-double in the losing effort. Cristina Rimicci followed with 12 points and Aneise Palmore had a bad shooting night but did her part with seven rebounds and four assists.

And after winning a shootout on Thursday, the Lady Vikings water polo team got sniped by the Pacifica Mariners in the CIF quarters.

The two teams battled through four quarters, but in the end, the Mariners trumped Samo 8-7.