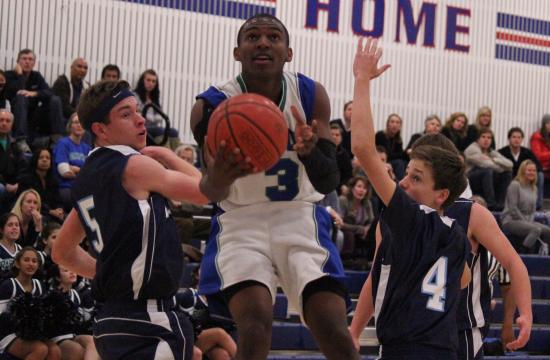 The Pacifica Christian Seawolves attacked the inside throughout the game and forced the Laguna Blanca Owls to play catchup all game en route to a 56-46 win to advance in the Div. 5A CIF Tournament.

The Seawolves John Register was the main factor with 21 points.

“I knew if we got the ball into John, we would have a huge advantage,” said Pacifica coach Kevin Kelsey.

“We just got to be mentally, considerably tougher,” Kelsey said. “We force things instead of staying in what we do. Sometimes when a team makes a run on us, we change our pace and get out of what we’re trying to do… that’s exactly what happened.”

And defensively in the second half, the threat came from Brandon Bickett heating up. Bickett scored 21 points of his own, and Kelsey characterized him as “automatic.”

But the Seawolves did not allow double digits from any other Laguna player, and that was the difference.

The Seawolves will face Newbury Park Adventist after their two-point upset of the No. 16 seed New Community Jewish on Wednesday. Game starts at 7 p.m. on Friday.

And although the Crossroads Roadrunners’ soccer team started in the wild card round on Tuesday, they didn’t play like it.

The ‘Roads blanked Yeshiva 8-0 at home to advance to the second round of the CIF. They will go on the road to play Tarbut V’torah on Thursday.

And now for the not-so fortunate.

St. Monica needed a big game to get the road win at Costa Mesa in Div. 4A. They got the opposite.

The Mariners fell to Costa Mesa 46-22. They finish the season at 13-14 and a third-place finish in the Camino Real League.

And Crossroads’ tough draw with their at-large bid in Div. 4A put them on the road at St. Anthony on Wednesday.

The final result put the Roadrunners on the losing end 66-56. The ‘Roads finished their season 11-14 and a fourth place finish in the Delphic League.