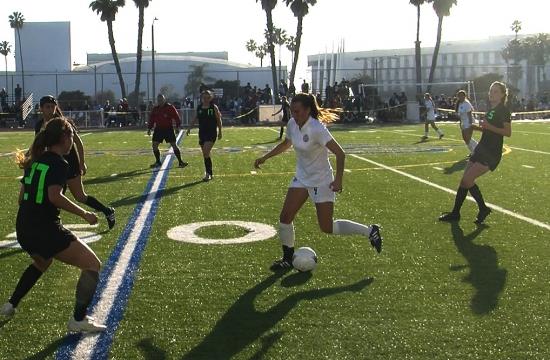 The first goal was a sign of things to come for Samohi.

The Lady Vikings’ soccer team caught a glimpse of their doom in the first half just by a half-second ricochet.

South Torrance’s Jessica Nakae had a free kick and aimed for the middle of the goal. The ball hit the leg of Samohi’s Rachel Paris and went into Paris’ own goal to put South on the board first.

After that, the Lady Spartans’ speed was too much. Both Amanda Whittle and Kalyn Kaemerle got broke away from the Viking defense to score and give South the 3-0 win.

“We, unfortunately, were about a step and a half (behind) the entire time,” said Samohi head coach Jimmy Chapman. “They just keyed on us, and as soon as we held onto the ball or played it, they would step in front and it was off to the races.”

The Lady Vikings finished the season 13-6-3. Although Chapman wanted to go farther in the CIF, he said the caliber of the two teams was fit for a later round.

“I do believe they (South) are going to be the favorites now to win the whole thing,” he said.