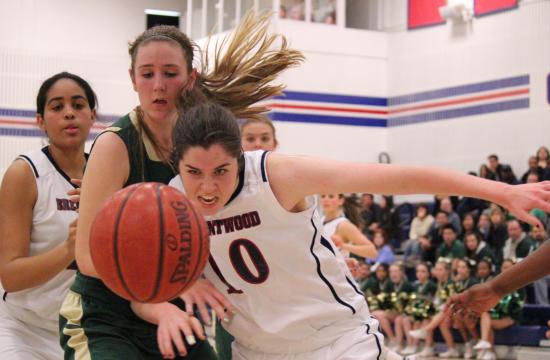 From the first quarter, any spectator could see both teams wanted the game.

A 9-0 St. Monica run was followed by a 9-0 Brentwood run. Hustle was matched by hustle. In the end, among 10 fatigued players on the floor, the Eagles made their shots while the Lady Mariners failed to score in the final four minutes and 22 seconds, allowing Brentwood to advance to the CIF semifinals with a 52-46 win on Wednesday.

St. Monica head coach John Skinner admitted at the end of the game, “it’s about putting the ball in the basket.”

“In the first half, I think we had an opportunity to create a bigger lead and we didn’t do it. They were missing a lot of shots early,” said Skinner.

The missed chances to get out to a commanding lead kept Brentwood in the game, and when the fire cooled from the Mariner shooters, the Eagles prevailed.

“We still have a lot of growth to do in terms of the mental part of the game… That said, though, from where we started the season to where we are today and how we were moving the ball and getting people involved is a really nice thing.”

Also in action Wednesday night were the Pacifica Christian Seawolves, hosted their first CIF game of the tournament at Milken Community.

The problem was they were facing the No. 1 seeded Rolling Hills Prep Lady Huskies. And these dogs bit.

Pacifica started the game up 4-0. The score never looked that good again. The Huskies went up 35-11 at halftime and cruised to a 52-23 win.