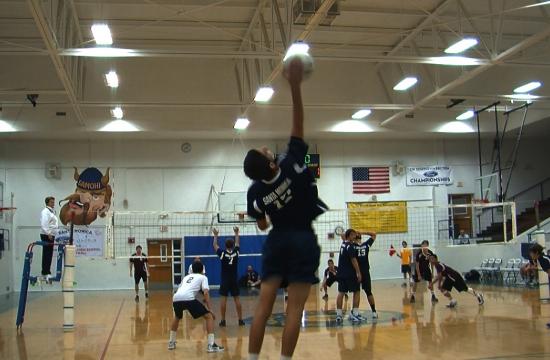 The final two games weren’t pretty, but the stat still goes to the win column for the Samohi Vikings boys’ volleyball team after their 3-0 sweep of Torrance on Tuesday.

After winning the first game convincingly 25-11, the Tartars put up a fight against the reigning CIF champions, scoring in the 20’s in the final two games, much to the dismay of the Samo players.

“I just think we got a little relaxed because we killed them (in the first game) and kind of eased up a little bit instead of keeping the pressure on them,” said outside hitter Dane Keckin.

Whether lackadaisical or lack-of-chemistry, setter Ethan Kahan said the Vikings were beating themselves.

“We made too many unforced errors and that gave them too much confidence,” Kahan said. “We had to put our heads together and just figure it out.”

And in the end, despite allowing 42 points in the final two games, the Vikings overcame. Coach Liane Sato said it is taking time to gel her experienced and inexperienced starters. With tests like this as well as the preseason tournaments like the Best of the West earlier this month, Samo is getting a trial by fire.

“(There’s) A lot of learning going on,” Sato said. “We like to compete against teams that are better than us, and so it shows us what we really need to work on and the things that we’re good at.”

Sato and her players said this is all to gear up for another postseason run, and the journey continues Thursday against Inglewood.