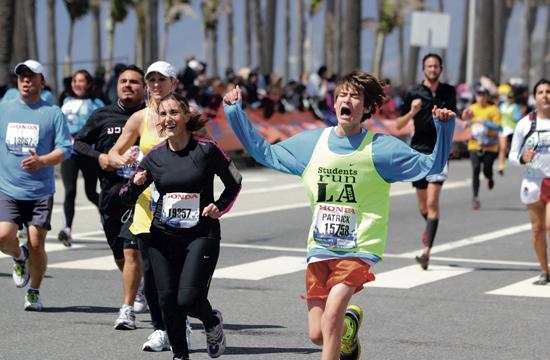 Of the 23,000 LA Marathon starting participants, 18,856 completed the 26.2-mile race that started at 7:29 a.m. on Sunday and wound its way from Dodger Stadium, through Hollywood and the Westside, before ending in Santa Monica to the picturesque backdrop of the Pacific Ocean.

“The ocean is very inspirational for these runners as they come towards the finish line down beautiful San Vicente that is known for its runners and reach Ocean Avenue and then they see the Ocean and the Santa Monica Pier in the background,” said Santa Monica Mayor Richard Bloom. “It is truly an emotional site for the runners. Some of them kiss the ground as they reach the finish line, and for the third year in a row, we have been able get better at it.”

The annual event provided the thousands of racers with an energizing release as they raced in athletic competition with athletes from all around the world to not only to prove they could compete, but also to gauge their times against the thousands of others who attempted the grueling race.

Thirty-one-year-old Simon Njoroge of Iten, Kenya captured the men’s title with a time of 2:12:12 keeping an average pace of 5:02.62, while 21-year-old Fatuma Sado of Addis Ababa, Ethiopia, won the women’s division achieving the fourth best performer in the Women’s Division of the LA Marathon with an overall time of 2:25:39 clocking a 5:33.42 pace.

Both athletes walked away with a new Honda car, in addition to their check prize, while others who placed in the Los Angeles Marathon took home portions of the $110,000 allotted to the money pool for crossing the finish line.

“This is the right place for the race to finish,” said Santa Monica Mayor Richard Bloom. “It really speaks of all Southern California and Santa Monica as a city really pulls it together and makes sure that the finish line experience for both the racers, the residents, and for all the spectators that come out is a fantastic one.”

Sado also took home the Honda Challenge prize of $100,000 for arriving before the first man, Njoroge, crossed the finish line.

Hollywood actor and long distance runner Sean Astin, who is famous for his epic roles in “The Goonies” and “Lord of the Rings,” ran the LA Marathon in support of the Achilles Freedom Team (and other charities) and even wore a hat supporting his base organization #Run3rd.

“There is a sense of achievement and community as well as the sexiness when competing in the LA Marathon,” said Astin the day before the race. “Nobody was handing out water in Mordor.”

Heading in to the race, Astin said he was wishing for “a little heat blast from around First street and Grand right near Disney Hall,” even though he admitted to enjoying running in the “cool weather.”

Astin competed in two prior LA Marathons, and even limped out his last race “fighting with every heart, nerve, and sinew” to break four hours after injuring his calf muscle training in the week prior to the LA Marathon in 2010.

Astin’s story of completing the race with his leg injury parallels his acting roles of dedication and perseverance found inside of some of the characters he has taken in Hollywood.

“The story in Lord of the Rings is trying to dramatize what it means to be committed to something more important than yourself and to struggle and yet persevere,” Astin said. “There’s 23,000 people who are going to feel the same way whether you are the top Kenyan (Simon Njoroge) who is finishing the race in (2:12:12) or not.”

Mai Mai Ali, daughter of Muhammad Ali who also ran in the Los Angeles Marathon, said it was fun seeing the people participate.

“It’s much easier to do it than to train,” Ali said. “When you are in a marathon, it gives you more energy. There are all these people shouting your name. There are even bands out there cheering you on.”

Gaertner reunited with Sgt. Gabriel Martinez (who also lost his legs in the blast) and both used hand-crank wheelchairs along with 25 other wounded Marines as part of the Achilles Freedom Team.

“We’re competitive and like to compete and it’s our way of getting back to where we were,” said Martinez who placed seventh in the HND division with a time of 2:03:11. “Anything that has to do with getting out and being active, we are all about it.”