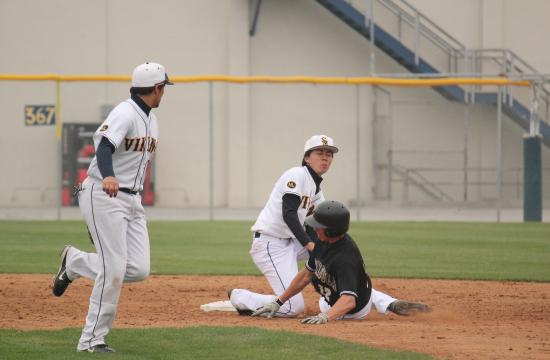 Despite a strong showing in the seventh inning, the Samohi Vikings baseball team could not pull off a win against the Palos Verdes Peninsula Panthers and lost 9-6 on Thursday.

The loss dropped the Vikings to 3-8, but Samohi head Coach Sheldon Philip-Guide believes his team’s strong showing at the end of the game shows the potential they have to win more games once they enter league play.

“We came out flat,” said Philip-Guide. “We came out not ready to play. Their guys came out energetic and they played a hard game and it took us a while to get into the game, but unfortunately it was a little too late.”

After struggling for six innings, the Vikings slapped in five runs in the seventh inning starting with Benny Arce who hit a double, stole third and advanced home off a double by Alex Turner.

Energy filled the bench soon after when Matthew Franco hit a single followed by another single by Nobu Suzuki, sending in McCreight and Nelson.

Then Lino Lares drove in both Franco and Suzuki off an error at first base that missed the glove of an outstretched Johnny Lauro of Peninsula, making the game 9-6 Peninsula.

For a few minutes it seemed as if the Vikings could pull off the impossible and come back from a nine-run deficit, but the threat ended after the sixth run.

“If our kids come ready to play, we can play with anybody,” said Philip-Guide. “We very easily could have been 8-3 (overall). It’s one of those things; a couple of those games, we let things slip away. When we play, we are a pretty good team. It’s just for some reason, today we just didn’t have it.

“I think we’ll improve. Obviously we got to go back to work this week and get back to practice.”

The Vikings hope their luck will change in Ocean League play, which starts on Tuesday.