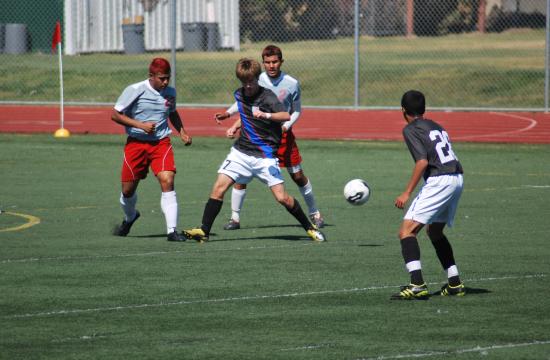 DOWNEY, Calif. – Only one winter team represented Santa Monica in the championship round of the CIF Playoffs, and that team, the Crossroads Roadrunners boys’ soccer team, played in its first-ever title match.

Unfortunately, the magical playoff run that included two golden goals and four consecutive matches decided by one goal came to an end with a loss, as the Roadrunners (15-7-1) fell short against Thermal’s Desert Mirage in the CIF Southern Section Div. 6 championship game at Warren High School’s Justice Field on Saturday.

“We definitely did not have our best game today,” Crossroads head coach Federico Bianchi said after the match. “I don’t think we were nervous. We just didn’t play our best, especially in the first half.”

With a scoreless first half, the action truly began in the second, when the Rams went on the attack. Junior forward Cesar Figueroa broke the scoreless tie on a breakaway goal in the 46th minute.

Eight minutes later, senior forward Hector Osuna fired a cross shot that found the back of the net to give Desert Mirage a 2-0 lead in the 54th minute.

Crossroads cut the Desert Mirage lead in half when Quaid Walker cut inside from the sideline and put a cross pass into Nate Merchant, who bent the ball past the Rams’ senior goalkeeper Humberto Juarez in the 70th minute.

The Roadrunners had a few more potential scoring opportunities in the final 10 minutes, including a pair of corner kick attempts, but none of them materialized.

“The second half, we came out with a little more urgency,” Bianchi said. “Once (the Rams) scored that second goal, we really started to really wake up and put some pressure on them.”

Bianchi said this season was only memorable because of the team he had.

“These guys have battled from being down to being up to overtime. They’re just a great group of guys,” Bianchi told the Mirror about Crossroads’ season. “They’ve done something that’s never been done in Crossroads history.”

Desert Mirage finished with a 24-1-1 record and won its second Division 6 soccer title. The Rams also won in 2008, the school’s first-ever title in any sport.