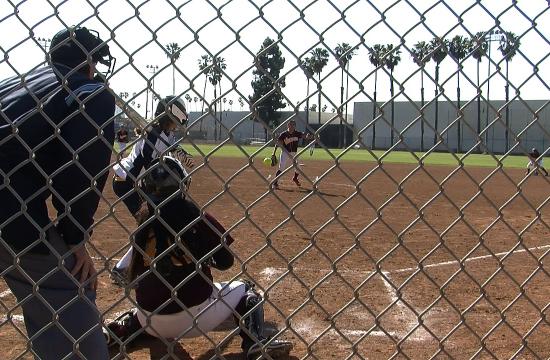 Tuesday’s game had a bad beginning and a bad ending for the Samohi girls. The Downey Vikings scored a combined seven runs in the first and seventh innings en route to an 8-2 win over Samo.

Downey’s Ale Guillen pitched a complete game and held the Lady Vikes to four hits while the other Vikings had 12 hits come off their bats for the game.

“We seem to always seem to have one bad inning – one bad inning where we just make a mental error or a physical mistake and then it’s kind of deflates our bubble a little bit,” said Samohi coach Debbie Skaggs.

Although Samo started in a 4-0 hole, the Lady Vikings fought their way back to cut the lead to three heading into the seventh inning. But Downey’s final rally led to the final conclusion.

The Lady Vikings fell to 1-8 on the season with the Ocean League starting next week after one final preseason game against Redondo Union today.

“We haven’t played a team that’s below our division yet,” Skaggs said. “We set ourselves up for a really difficult schedule. The negative is you don’t get a lot of vic(torie)s. The positive is you’re getting good experience playing tough competition.”

“I tell the kids, ‘It’s not where you’re at today, it’s where you’re going to be at the end of the season during playoffs’… If we work hard and keep working at practice, I think we have a good chance of winning league for sure.”