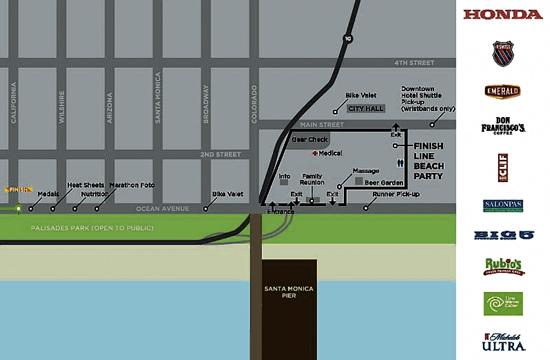 The Honda LA Marathon will finish in Santa Monica for the third year in a row this Sunday, March 18.

The “Stadium to the Sea” course begins at Dodger Stadium and winds past dozens of iconic Los Angeles landmarks before finishing at California and Ocean Avenues, just steps from the Santa Monica Pier.

The route will continue west to Ocean Avenue and then south on Ocean Avenue to the finish line at California Avenue.

As runners get to San Vicente and 21st Place, they will be re-energized by the sounds of the surf rock band “LA River Swim Team,” playing on the course for the first time. Further down on San Vicente at Ocean Avenue, the rock band “Core” will play for the seventh consecutive year.

In addition to the businesses and local bands, three Santa Monica-based Honda LA Marathon charities will support the runners with enthusiastic volunteers along the course to cheer them on as they head toward the finish line.

Sojourn, a nonprofit organization that meets the emergency and long-term needs of thousands of domestic violence victims each year, will provide runner support at San Vicente Blvd. and Lincoln Blvd.

In celebration of the race, many local businesses are offering marathon discounts for pre-race meals, shopping, and dining. Several Santa Monica hotels are also offering special marathon rates. A full list of marathon-friendly offers can be found at: www.santamonica.com/visitors/what-to-do/la-marathon/deals.

Things To Keep In Mind On Race Day:

• Streets along the race route will be closed prior to the race start. All route roads will be closed by 6 a.m. Roads will reopen on a rolling basis starting at the east end of the City around 2:30 p.m. All roads should be reopened by 5p.m. No vehicles will be able to enter/cross the route.

• Pedestrian crossings may be allowed at selected crosswalks as indicated by signs or Traffic Safety Officers.

• Speakers will be directed away from residences to the extent possible.

• Free Bike Valet will be available at the Santa Monica Bike Center at 2nd Street and Colorado, and on Washington at Ocean Ave.

• Visit www.smgov.net/parkingmaps for real-time parking info and the number of spaces available.