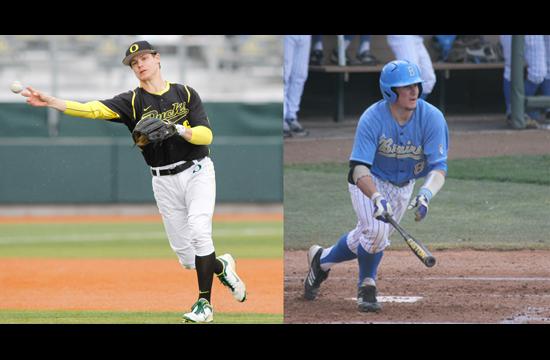 There is nothing like sibling rivalry to add to an already ongoing battle between two storied college athletic programs. Yet when the Oregon Ducks come to town and take on the UCLA Bruins in a three-game baseball series at Jackie Robinson Field that began on April 5, it will mark the first time both Tyler and Scott Heineman will take the field from opposing dugouts.

It is a quasi-homecoming for the Oregon freshman Scott Heineman, who grew up with his brother, UCLA junior Tyler Heineman in nearby Pacific Palisades. As he finished his California All-League career at Crespi Carmelite in Encino, Scott Heineman would occasionally make the trip to Jackie Robinson Field to watch his older brother play error-free defense as UCLA’s starting catcher for 13 games.

“I went to nearly every home game UCLA played in my brother’s first two years,” Scott Heineman told The Mirror. “I learned a lot about the game by just watching it but I learned a lot from my brother by the way he went about his business. He was constantly moving and would hustle from spot to spot. I would see him taking mental at bats when other players were at the plate to give him the best chance when he came up against the same pitcher. He’s my role model.”

Of course neither Scott nor Tyler wanted to see the other make an error as they face off against each other in this week’s three-game set, but that does not mean the brothers will not have a little fun with each other if one (Scott) takes the batters box as the other (Tyler) hopes to catch a few strikes.

“When we were younger, there was a lot of competitiveness,” Tyler Heineman told The Mirror. “Now it’s a lot different. We play different positions. He wants to do all he can to help his team, I want to do all I can to help my team. We’re very supportive.”

Indeed, both brothers are taking their first matchup against each other in stride. While they both have strong competitive spirits, they both also wish each other well.

“We’ve both been blessed with a special opportunity to play in possibly the best conference in the nation,” Scott Heineman said. “Being so close in age, we’ve always been competitive with one another and it’s kept us motivated to keep striving forward to become better players.

To be fair, there was always some level of competitive spirit between Scott and Tyler, who lived, ate, and breathed baseball since their respective Little League days here in Santa Monica.

Their father, Steve Heineman, who is a lieutenant with the Santa Monica Police Department, told The Mirror both have always had high expectations for each other, though Tyler, being the older brother, was always tough on Scott.

“They are like 18 months apart,” said Steve Heineman who coached both of his sons when they were younger. “They are very close, except when it comes to baseball, Tyler was very hard on his brother. They were real competitive when they played together, but they are very close.”

Of course, being their father, Steve Heineman said he would show support for both of his sons by donning the jersey of another PAC-12 team.

“I’ll probably wear an Arizona State jersey,” he joked, but then seriously adding, “Nobody loses. They are both doing well.”

Both teams enter the three-game weekend series battling for first place in the PAC-12, with UCLA tied for the top spot with Arizona. Sporting a 7-2 record in conference (20-5 overall), the Bruins also own a slim one-game lead over Oregon, who is 6-3 in conference (18-8 overall).

A series win by either team will have immediate and long-term implications in the race to win the PAC-12.

However, despite the stakes this weekend, at the end of the day family always trumps baseball.

“Absolutely, this is an important series for us … (but) I am very proud of Tyler and what he has been able to accomplish because I know how hard he has worked to get to this point, Scott Heineman said. “I love that guy and it’s going to be a special moment to step on the same field as him and battle it out.”

Indeed, both Scott and Tyler will be rooting each other on beyond college baseball; Scott aspires to become a baseball broadcaster down the line, while Tyler is majoring in Psychology, but is definitely keeping the door open to continue his baseball career.

The weekend’s series is the only time this season UCLA faces Oregon; the Bruins will travel to Eugene, Ore., next season, providing both brothers another opportunity to play against one another.

Until then, both Heineman’s will be working hard to win the PAC-12 title and stamp a ticket to the College World Series.

No doubt, both brothers will be mightily pleased should one of them remain the last one standing, but they are equally proud of each other for how far they have already come.

“It’d be like a dream come true,” Tyler Heineman said of watching his brother take his field for his first at-bat. “It’s kind of surreal.”

Oregon took two out of three from UCLA, winning 6-2 and 8-3 on Thursday and Friday while UCLA pulled through 8-6 in Saturday’s game.

Tyler Heineman outplayed his younger brother, getting four hits and scoring twice in the series. But Scott did his part, driving in two RBI on a sacrifice groundout and a sac fly.

UCLA will host Cal State Fullerton on Tuesday while Oregon will begin a two-game series at home against San Francisco on Tuesday.