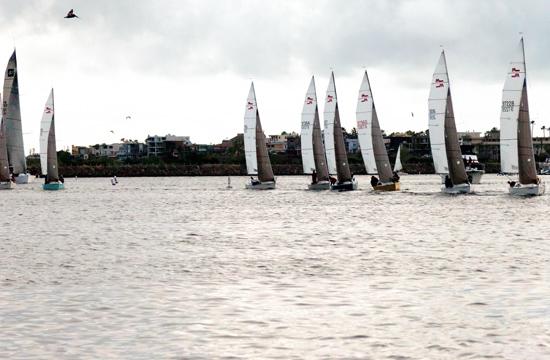 It was “Anchors Away!” at the California Yacht Club as 58 boats set sail in the 48th annual Sunset Series in Marina Del Rey on Wednesday.

The Series is a weekly race every Wednesday night with eight different race classes that attracts numerous sailors every year because “(It’s) a break in the week,” joked Sailing Race Officer Bill Stump.

“It’s a great way to get out on the water with some of your friends and race against some of your other friends… You know the people you’re racing against. It’s not like the LA Marathon with a total group of strangers.”

Club Commodore David Collins said there’s no question this event is the biggest mid-week event in Marina Del Rey, making his job that much more important.

“You have to have a lifetime’s experience in sailing if you’re going to be effective,” Collins said, “because it is many different kinds of yachts (and) boats, and they’re all scrambled together in this event.”

Collins said the boats are separated into classes by size and speed, and it’s his job to keep track of which boat is in which class. He added the small number of boats is because it is early in the season and the fact they avoided a storm on Wednesday.

The races have begun and will continue every Wednesday night until Sept. 5. While these are actual races and a competitive drive to sail past your opponents, Stump said this is an event that brings the sailing community together.

“You know (your opponents). You drink with them. You help them with their boat. They help you with yours,” Stump said.

“This is what we do with our boats. We go out and race them. We try to beat our friends and neighbors, and if they beat us, we’ll get them next week.”