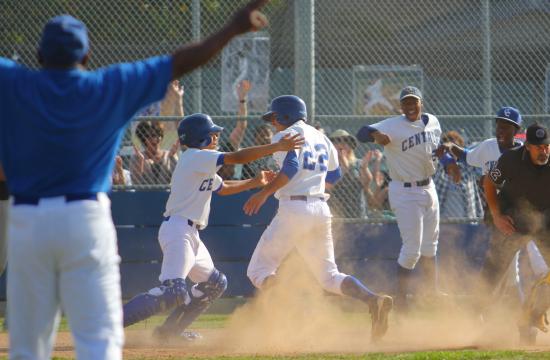 Santa Monica High School’s Connor Greene and Culver City’s Jay Sterner battled against each other from the mound for seven full innings. They did their jobs. After six and a half, there was still no score.

The game ended in dramatic fashion at the bottom of the seventh inning when Darian Sylvester drove in Pablo Saucedo to give the Centaurs the Ocean League crown.

“Connor Greene pitched a hell of a game,” said Vikings Head Coach Sheldon Philip-Guide. “He went out there and he battled and he wasn’t afraid to go after their best hitters and it’s a shame that he had to lose.”

Culver caught some momentum in the top of the seventh inning and the Centaurs struck hard starting with Darian Sylvester who tagged out Trent Nelson as he tried to steal second.

Then Saucedo made “the best catch (Samo assistant coach Tony Todd) ever saw in high school” when he slammed into the chain link fence in right field and somehow managed to hold onto the ball, robbing the Vikings of a needed run.

Saucedo winced in pain in the arms of his teammates as they brought him back to the dugout, but he was happy he had caught the ball.

His reward was the game-winning run on Sylvester’s base hit to right.

This ended the game 1-0, gave Sterner the win, and sent the Centaurs into a dog-piling frenzy on top of Sylvester.

“It was a tough fought game between two equally good teams,” said Philip-Guide. “Someone had to win and someone had to lose and unfortunately we were on the short end of the stick.”