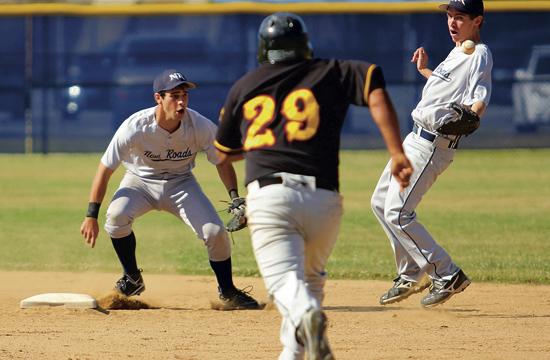 In baseball, down-time allows fans to think a little extra in between pitches. And that is when the littlest things become omens for what is to come.

Perhaps nobody but this reporter thought twice when the most minute routine action went awry. But it happened. And it foretold the story of what was about to take place.

New Roads pitcher Niko Delgado came into the top of the seventh inning three outs away from carrying his Jaguars to the championship. He had pitched a complete game, had the number of the Firebaugh Falcons all day and clung to a 2-1 lead in their CIF semifinal matchup on Tuesday.

After his catcher, Blaise Dolcemaschio, called “coming down” and Delgado fired the last warm-up pitch down the pipe, Dolcemaschio, as he had done since he started playing catcher at 10 years old (he is now 18), propelled himself forward like a pro to throw a strike of his own to second base. But the ball slipped from his hand and fell to the ground.

Dolcemaschio was focused on this last inning. He didn’t smirk. He didn’t laugh it off. He didn’t get frustrated. He just swallowed hard, picked up the ball and chucked that ball to second base like the professional he is. Perhaps he felt it or perhaps he didn’t feel it, but something wasn’t right.

The first out was flawless. Delgado forced Firebaugh’s Anthony Rios to foul out to Christian Vibiano at first base. But Armando Murillo took his at-bat next and reached first on a base hit up the middle.

With only one out, Adam Palomino stepped into the batter’s box. He took Delgado’s breaking ball straight to Franky Bernstein at short. A routine double-play and the game is over. Only something went wrong. The ball took three bounces of descending height from the ground: (approximately) two feet, foot and a half, one foot. But the fourth bounce defined the phrase “bad hop.” Bernstein put his glove less than a foot off the ground and the ball shot to his bicep and bounced to his left, past second base and past second baseman Spencer Backlar. It was an error, but New Roads still had a chance.

Delgado struck out Christian Barrera to get the second out and had two strikes on Francisco Miranda. But Miranda drove Delgado’s breaking ball to right field, scoring Murillo clean, and an errant throw to third allowed Palomino to score to make the score 3-2 Falcons.

“Their clutch hitting was tremendous,” said New Roads coach Matt Steinhaus. “They were down to their last strike… and they were bottom of the order and they refused to go down.”

The Falcons didn’t stop there. Delgado’s frustrated fast ball was crushed by Ramon Lopez over the head of Koki Goto in right field, scoring Miranda to make the score 4-2.

“Niko pitched, I thought brilliantly,” Steinhaus added. “Well enough to beat any team on any day, and we just couldn’t close the door when they had that final rally.”

Delgado’s fortunes turned briefly. He ended the rally with the next batter and reached first and second base safely as the lead-off hitter in the next inning. But that luck was short-lived. With two on, Anthony Carrillo’s drive to left-field, which would have been an RBI-double on any other day, was snagged by Rios, who set his feet and put his throw on a line to second base in time to gun down Delgado. Instead of two runs scored, New Roads now had two outs.

Zach Ramsey would score Bernstein from second two batters later to cut the lead to one, but Palomino struck out Pedro Dupree with the bases loaded to end the game 4-3 and end the Jaguars’ dreams of a CIF championship.

“This team had tons of heart. They get credit for everything. They had the focus to basically turn this season into what it was,” Steinhaus said.

“We’ve always come back strong from devastating losses… This is one loss we just don’t have the game to rebound with.”