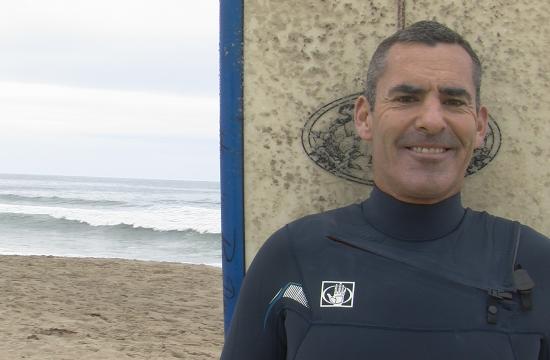 Garrett McNamara lives in the ocean. He does his best to protect it everyday.

“Everything that happens on the land trickles into the ocean, so you got to be conscious about everything you do,” he said.

McNamara is a surfer who recycles, cleans the beach, stays strong in his vegetarianism and even uses Raw Elements, an all-natural sunscreen that contains no chemicals. He makes sure nothing foreign comes into his home. It is a challenge, but it is what he does.

And, after over 30 years of surfing, the ocean gave something back to McNamara. In November, a 90-foot wave off the coast of Portugal allowed the 44-year-old to ride into the record books.

“I love riding big waves, it’s what I live for. It’s always so nice to find a new wave somewhere, something that you’ve never surfed or has maybe never been surfed. And then, it just makes it so exciting, so…”

McNamara struggles to find the words, but he smiles while he thinks about it. Then, finally…

Every time McNamara and his board dip into the ocean, he can find that love. And when he can pass on that love, it is even more of a thrill.

He admits he is torn. He has been invited to Anaheim for the annual Billabong Awards and is nominated for three of them including Biggest Wave. But he may have had more fun Wednesday, re-enacting stories on the beach with middle schoolers from Lincoln and JAMS in Santa Monica.

McNamara was all smiles the entire morning, seeing newcomers find that love he has experienced time and time again.

“When you challenge a wave, then you get smacked down.”

The rider who constantly seeks the next big wave admits he doesn’t get an adrenaline rush anymore in the ocean. Now, it’s just love… from both sides.

By mirrormmg May 3, 2012
in Sports
Related Posts