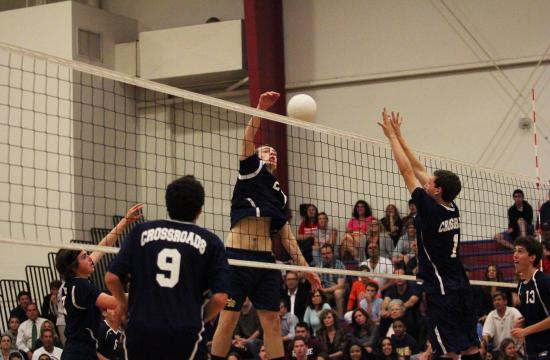 As exciting as this game was, these two teams need to play more often.

For the first time in either school’s history, Samohi competed in an organized sport against Crossroads. Both teams are based in Santa Monica, but the private Crossroads is nearly ten times smaller than the public Samohi.

The ‘Roads pounded the defending-CIF-champion Vikings for two straights sets and putting them in a two-game-to-none hole.

But Samohi worked their way back in the third and fourth sets, fending off late rallies from the Roadrunners in both games and tying the match up.

And perhaps it was fatigue for the Roadrunners (who played nine total sets in their opening and second round matches during the week compared to Samo’s six). Perhaps it was momentum. But no matter, the final score stood: Samohi victorious in five.

Samo moves on to play Campbell Hall on Tuesday in the CIF Semifinals.