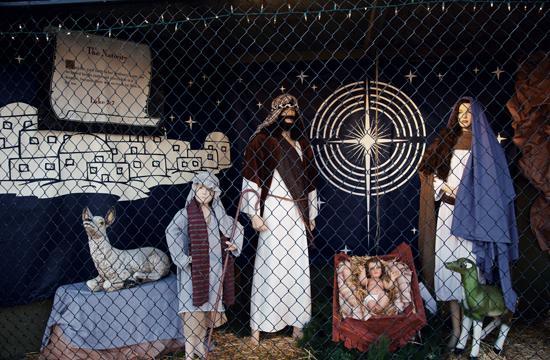 When the Santa Monica City Council meets this Tuesday, May 22, there is expected to be a vote on the future of the Nativity Scenes that appear each year in Palisades Park.

Business leaders who helped start the Santa Monica Nativity Scenes in 1953 as well as business leaders today are voicing support for continuing the Christmas tradition in Palisades Park in its hour of trial.

City Attorney Marsha Moutrie has recommended the City Council vote to ban all displays on May 22, including the Nativity Scenes, from Palisades Park. Nativity Scenes backers have proposed designating the two display blocks a December holiday decoration forum and reforming application rules instead.

Barring the Scenes from Palisades Park would be a sad loss to the city’s sense of community, said Susan Gabriel Potter, owner of ISU Bob Gabriel Insurance Co. and a Santa Monica Chamber of Commerce Executive Board member.

“It brings the spirit of the holiday season to Santa Monica,” she said. “It has been a tradition for almost 60 years in Santa Monica as well as a tradition in my family. My father took me to the Scenes when I was a girl, and I took my children to the Nativity Scenes every holiday season, and I’m sure this is true for many, many families.”

Her father, insurance agent and ardent community advocate Bob Gabriel, was a devoted supporter of the Nativity Scenes for more than a half-century. He was its fund-raising chairman at the time of his death in 2007. His daughter has stepped into that role in association with her mother, Louise Gabriel, the president of the Santa Monica History Museum.

Aiming to attract more visitors and shoppers to town, the Santa Monica Chamber of Commerce partnered with community churches to start the display in 1953. The business alliance continued as a major donor and organizer until 1982, when tough financial times forced its exit.

Numerous Santa Monica businesses continue to support the Scenes, and Potter has been collecting endorsements for the longtime celebration from commercial leaders.

Others in insurance and finance on Potter’s list of endorsers include Damian J. Valdivia of White & Company Insurance; Dave Nelson of Tegner-Miller Insurance Brokers; Dick Lawrence of National Bank of California, Brentwood Branch, and his wife, Char.

John Bohn, chief executive and founder of The Bradmore Group, an industrial real estate firm in Santa Monica with statewide operations, said the Scenes continue to draw visitors to the city.

“There are people who come from all over the area and outside the city limits of Santa Monica to look at those Scenes,” Bohn said. “It’s traditional and an important item in the Christmas holidays.”

He said he and his children and grandchildren go every year.

“It’s part of the Christmas holiday season for us,” he said.

Bill Rinker, manager of Toyota Santa Monica, a member of the LACarGuy group, also said he endorsed the Scenes.

Potter said she would continue her efforts to ask business leaders to e-mail the City Council or attend the meeting starting at 6:30 p.m. Tuesday, May 22, to support the Nativity Scenes.

In her e-mail to them, she wrote, “It could make all the difference as to whether this tradition will be saved or become past history.”