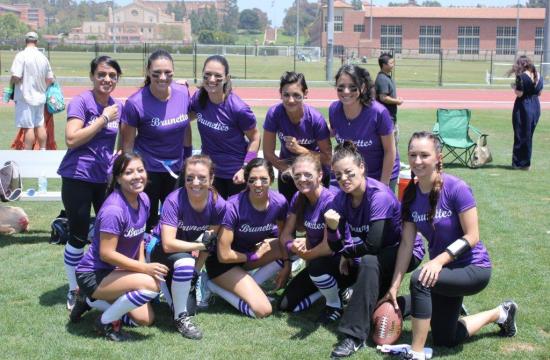 Gilmer and Topp suited up for “Team Blonde” while Perez and Stango played for “Team Brunette.”

Off the field, the teams united in an effort to raise funds and increase awareness of Alzheimer’s disease among a new generation.

Together, Blondes vs. Brunettes raised more than $15,000 for Alzheimer’s care, support, advocacy, and research programs.

“It was a hard-fought victory for the Brunettes,” said Susan Galeas, president and CEO of the Alzheimer’s Association, California Southland Chapter.

“Each participant played an in important part in their teams with helping the Brunettes win the game and the Blondes being the top fundraisers. Regardless of which team scored the most points or raised the most money, we came together as one team focused on tackling Alzheimer’s.”

McCoy Moretz, M.D., F.A.C.S, Beverly Hills facial plastic surgeon who chaired the event, said Alzheimer’s disease had “touched many of us who played and coached today.”

“Blondes vs. Brunettes united us for a great cause and raised much needed funds for the Alzheimer’s Association,” Moretz said. I proudly congratulate all of the players and our team of volunteers whose participation helped make this first annual fundraiser an overwhelming success.”

Among the players, coaches and cheerleaders at this year’s game were actor/athlete Bobby Hosea, coaching Team Brunette; members of sketch comedy company Straitjacket Society; and several from the entertainment industry, including actress Bre Blair from Team Blonde, who raised more than $1,600, giving Team Blonde the “win” in fundraising for the game.

There is still time to donate to a favorite team or player by visiting http://bvb12.kintera.org/faf/home/default.asp?ievent=1000950.