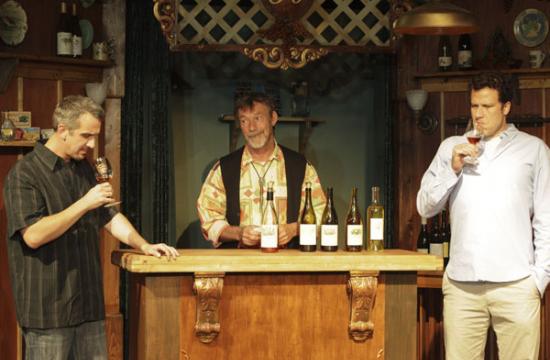 Sideways The Play opens today with performances every Friday and Saturday at 8 p.m. and Sunday at 2 p.m. through July 22 at Ruskin Group Theatre in Santa Monica.

Jonathan Bray (Jack) has appeared with Frank Langella in “The Father” and with Nathan Lane and Sarah Jessica Parker for The Roundabout Theatre’s benefit performance of “Once In A Lifetime.” Most recently he appeared as The Narrator in Craig Wright’s “The Pavilion” and as Valene in “The Lonesome West.”

TV credits include episodes of ABC’s “Man Up” and Showtime’s new comedy “House of Lies.” Jonathan stars in “The Walkaround,” a mockumentary about auto shows, set to premiere at the Indie Spirit Film Festival in 2012.

John Colella (Miles) is a 2012 Indie Soap Award Winner – Best Actor in a Comedy for his Web Series, “Vampire Mob.” Film credits include: “Hotel Noir,” “Girl Walks Into a Bar” (1st Major Motion Picture made exclusively with and for YouTube), “The Chicago 8,” and “The Swear Police” (LA Comedy Shorts Film Festival winner).