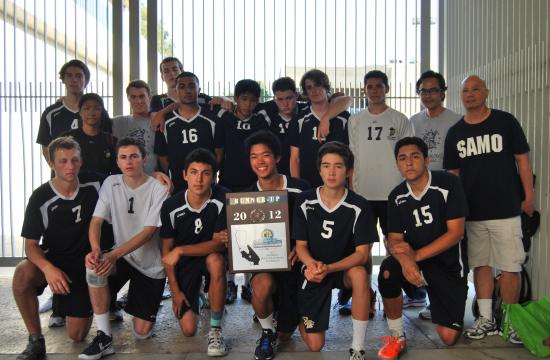 CYPRESS – The Samohi Vikings boys’ volleyball team were on the verge of making a comeback of the ages, only to watch a spike attempt fly out of bounds on the final point of Saturday’s CIF Southern Section championship game against the Cathedral Phantoms (27-8-1).

“We dug ourselves a big hole, but we showed some poise and came back,” Vikings head coach Liane Sato said after claiming the runner-up plaque. “It was just too many mistakes in the end. Too many errors at the net.”

Cathedral won the first two games and appeared to be in position to complete the three-game sweep after a Justin Adelmann kill gave the Phantoms a 15-14 lead in the third match. However, momentum switched jerseys after consecutive blocks by the Vikings’ frontline and a Dane Keckin kill gave the Vikings an 18-16 lead.

After another Keckin kill and a pair of Phantom miscues, the Vikings kept the match alive with a 25-20 win in the third frame.

Keckin kept the Vikings close early in the fourth set with a pair of kills early to give Samohi a 4-3 lead before both teams essentially exchanged points the rest of the way. The Vikings finally created some separation from the Vikings after an ace, a kill, and another Cathedral miscue to go up 24-20.

A service fault and an out-of-bounds play allowed the Phantoms to cut the Vikings lead to 24-22, but Spencer Cramer’s kill forced a fifth and deciding set.

The Phantoms jumped to a quick 4-1 lead in the abridged final match – the first team to 15 points wins – after the Vikings failed to dig out Alejandro Albarran’s scoring kill.

But after a Cathedral double hit and a pair of Samohi kills, the Vikings tied the score at 6-6.

Samohi found itself trailing again after a Steven Sosa kill and an Ivan Palomera block, but the Vikings managed to tie the game yet again at 9-9 with another Keckin spike.

Keckin’s third and fourth kills of the match gave the Vikings a 13-11 lead and within two points of a title. But the Phantoms cambe back to tie the game again at 13-13.

The Vikings had a breakthrough, though, when the Phantoms were unable to convert on a dig, giving Samohi a 14-13 lead and a potential match-winning service.

On the ensuing service, Samohi failed to bump, set, spike, dig, or pass in response to Cathedral’s over.

The set tied at 14-14, Cathedral gained the advantage when a Vikings’ kill attempt sailed out of bounds.

Yet, a Vikings violation gave the Phantoms a 17-16 lead, and when Trevor Pye’s kill attempt went out of bounds, Cathedral claimed the CIF Southern Section Division 4 championship.