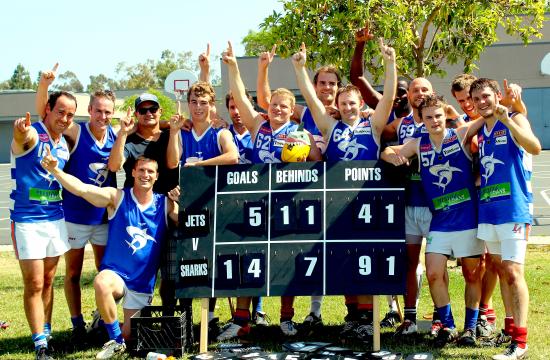 There’s a large group of Sharks in Santa Monica, but don’t worry, this breed isn’t vicious – unless you happen to be their opponent on the field.

While the rest of LA either mourned the fortunes of the Lakers or Clippers, or was waiting nervously on the fate of the Kings (they won), a small band of weekend warriors were celebrating the first 2012 sporting triumph for the city on Sunday afternoon.

Admittedly, it is a bit of a stretch to claim that even family members of the Santa Monica-based Beachside Sharks were aware of the feat.

However, for the 13 players who woke on Monday a little worse for wear, the Southern California Australian Football League (SCAFL) championship was a fitting reward for the efforts over the past few months.

For those unfamiliar with Australian Football (or Aussie Rules, as it is called), the game contains elements from rugby, soccer, and basketball.

The SCAFL competition is made up of teams scattered across the metropolitan areas of Los Angeles, Orange County, Riverside, and San Diego.

All of the players are amateurs – some being Americans who are new to the sport, others being Aussie ex-pats now living in the area.

The game is fast-paced and hard-hitting, and the sport’s full-physicality was on display during the championship.

The Sharks’ focus was evident before the game.

During warm ups and stretches, players engaged in universal chatter, pumping each other up.

Head coach John Fragomeni implored his team to push hard, dig deep, and give it all for the full four quarters.

In the huddle before the game, each Shark shared what they were going to do to help the team secure victory.

“Though the conversation was naturally full of clichés, it amazingly didn’t feel trite,” Fragomeni said. “From the seasoned veterans to the rookies, the belief was there, and the will to win for each other fueled that desire.”

The Orange County Jets came in as the favorite, having lost only one game during the regular season, coincidentally enough to this same Beachside club.

However, the Sharks’ intensity and attack was evident from the opening bounce and by the second quarter they could smell blood in the water.

Team captain Adrian Heffernan led the onslaught, kicking seven goals over the course of the game. Jason Bottrell and Kaine Price were strong in defense for the Sharks, allowing the Jets to kick only five goals in the entire match.

All of the Sharks rose to the occasion, consistently controlling the flow of the game and constantly pressuring Orange County when they had the ball.

“Chase (Bryant) and Brandon (Heicklen) really stepped up for us today,” he said. “To see two American players who’ve only learned the sport over the past couple of years play at such a high level really speaks to the quality of athletes we’ve been able to recruit to the club”.

Indeed, Bryant, who previously played college football, had several highlights in the game, including 3 goals. But equally as impressive was Heicklen, the youngest player in the league at only 14 years old.

Routinely matched up against players several inches taller (and several years older), he racked up possessions all over the field. Later this summer he’ll take his talents to Australia as one of only two Americans selected to participate in the NAB Under 16 National Championships.

For now, the Sharks can celebrate bringing the SCAFL championship to Santa Monica. In just a few weeks, players from across the LA area will form the LA Dragons, a traveling side which competes against teams from all over the USA.

For more info on Australian Rules Football in Southern California, including info on how to join a team, visit www.ladragons.com or facebook.com/ladragons.